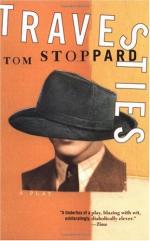 Read two or three poems by Tristan Tzara. What elements in the poems do you think reflect dada-ism as espoused by the character of Tzara in Stoppard's play? What other poets can you find that follow dadaism in their works and who are they9

Investigate the status writers had in communist Russia. Were Lenin's opinions that were cited in the play on the relationship between art and politics upheld after the revolution? Were they altered7

Read Oscar Wilde's The Importance of Being Earnest What specific thematic and structural parallels do you find between the two plays? What point do you think Stoppard is making by borrowing so much of Wilde's play?

Cut up one of Shakespeare's sonnets and then randomly arrange the words as Tzara does in the play. Do you think the result constitutes a work of art? Give reasons