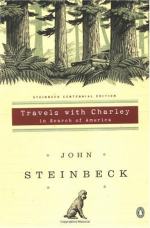 Travels with Charley: In Search of America Summary & Study Guide

John Steinbeck
This Study Guide consists of approximately 45 pages of chapter summaries, quotes, character analysis, themes, and more - everything you need to sharpen your knowledge of Travels with Charley.

Travels with Charley: In Search of America Summary & Study Guide includes comprehensive information and analysis to help you understand the book. This study guide contains the following sections:

This detailed literature summary also contains Topics for Discussion and a Free Quiz on Travels with Charley: In Search of America by John Steinbeck.

John Steinbeck (Feb. 27, 1902 - December 20, 1968) embarks on a journey to discover America in the fall of 1960. He drives a brand new three-quarter ton pickup camper truck and travels with his dog Charley. His purpose is to learn something about the vast United States and write a book about his experiences.

His route takes him through Vermont, where he discusses politics with a farmer, and up to the northernmost part of Maine. There he meets a clan of Canadian migrant workers who help with the potato harvest. He shares a bottle of fine cognac with the workers who appreciate the gift very much due to their French ancestry. After a disturbing encounter with an empty restaurant, Steinbeck attempts to cross the border into Canada. The Canadians warn him about the US requirement for a certificate that Charley has had his rabies vaccination, so Steinbeck turns back only to be detained by the US Customs officer. The officer finally lets the author back into the US even though Steinbeck had never actually crossed over into Canada.

Wisconsin dairy farms and the Wisconsin Dells impress Steinbeck. He tries to see the Twin Cities but becomes lost in the heavy traffic. At the Maple River in North Dakota, the author meets an interesting traveling Shakespearean performer. Steinbeck spends a night in the Bad Lands of South Dakota, where he discovers that the area is much more friendly and beautiful at night than in the daytime. He also discovers that Montana is his favorite state except that it has no seacoast. The development of Seattle gives the author a feeling that the nature of building up a place seems like destruction too. He visits the giant sequoia trees along the coast, sensing that they have a kind of consciousness and communication that humans cannot understand and therefore fear.

In California where Steinbeck had grown up, he learns that a person cannot go home. Home changes, people die and nothing can ever be the same. He leaves California as quickly as he can and spends Thanksgiving in Texas with his wife on a friend's ranch. Steinbeck thinks that Texans make up a unique kind of American. He then goes to New Orleans and witnesses a nasty demonstration against school desegregation. The impact of this affects him very deeply, but he cannot take sides in the civil rights struggle. He has no understanding of it.

The journey ends for the writer while in the South. He moves through the remaining states back to his home without seeing or sensing much of anything. He then becomes lost in New York City, but a kindly police officer guides the author back to his home on Long Island. What Steinbeck discovers is that every journey is unique to time, place, person and mood.

More summaries and resources for teaching or studying Travels with Charley: In Search of America.

Travels with Charley: In Search of America from BookRags. (c)2022 BookRags, Inc. All rights reserved.