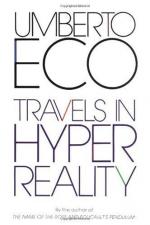 Umberto Eco
This Study Guide consists of approximately 30 pages of chapter summaries, quotes, character analysis, themes, and more - everything you need to sharpen your knowledge of Travels in Hyper Reality.

This detailed literature summary also contains Topics for Discussion and a Free Quiz on Travels in Hyper Reality: Essays by Umberto Eco.

Travels in Hyper Reality is a collection of essays written in various times and contexts by Umberto Eco, a self-defined semiologist. Semiotics is the study of the language of signs and how they are formed through language, communication, and organization. Eco takes the reader through various explorations of the different forms that these signs may take in day to day life, including behaviors, politics, artificial landscapes, and words. Eco suggests that freedom of thought arises through understanding the signs that are being employed through various agencies.

Eco spends a great deal of time in the first chapter discussing artificial landscapes, starting with a current laser/optical display of holography in New York and moving through every form of artificial landscape imaginable. He covers wax museums, modern art museums, Disneyland, restaurants and hotels. His suggestion is that all of these landscapes create a fictional reality that is often more detailed than the actual reality, hence the term hyper-reality. The end result is that the duplicate is so good, there is less focus on the original.

Eco next suggests that the Western world continues to be fascinated by the medieval period as evidenced by the popularity of books, movies, and games that portray medieval themes. He believes that this is because the root of our current issues began in the middle ages. Eco believes that the movement towards religion, including the formation of cults and terrorism, as further evidence of this idea.

Eco goes on to outline what he describes as a crisis of reason and gives five definitions for understanding reason. He describes the necessity for a kind of guerrilla warfare based on semiotics. The people receiving messages must be able to interpret them appropriately and not simply as the senders of those messages intend.

Eco discusses the importance of sports and how individuals can come to blur the lines between talking about sports and actually participating in them. It is a kind of spectator confusion that occurs in other semiotic layers as well. He continues on by talking about the origination and effect of cult movies, focusing in particular on Casablanca. Eco states that each movie has certain archetypes of narrative and that Casablanca attempts to use all of them. He suggests that this is the characteristic that makes it "cult".

Eco goes on to state that people have lost the interactional feeling of life and instead interpret experiences through images already created for them. He also discusses the dominance of the visual faculty in sensing, through the work of McLuhan. Eco then goes on to reiterate his idea that it is not the form, the media, or the content of the message that makes a difference, it is in fact how the message is received that makes the difference.

Eco describes the relationship between language power and force, paying particular attention to the ways that language can serve to apply and maintain oppressive structures over people and culture. He concludes with some comments about comedy and how it transgresses given structures.

More summaries and resources for teaching or studying Travels in Hyper Reality: Essays.