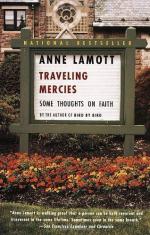 Anne Lamott
This Study Guide consists of approximately 35 pages of chapter summaries, quotes, character analysis, themes, and more - everything you need to sharpen your knowledge of Traveling Mercies.

This detailed literature summary also contains Topics for Discussion and a Free Quiz on Traveling Mercies: Some Thoughts on Faith by Anne Lamott.

Anne talks about her childhood at length. She is the child of atheists but likes it when she has the opportunity to attend church. She says she pretended church was foolish to please her father who was raised by missionaries in Tokyo and despised Christianity. Her mother sometimes attends midnight mass but Anne's opportunities to attend church are largely limited to when she goes with a Catholic friend or her grandparents.

Traveling Mercies is actually a series of essays about Anne's life. The first is the longest and gives the reader a look at her childhood and her early years roughly to the point when she gives up the alcohol and drugs. Thereafter, there are a series of essays, each offering a brief look at some particular aspect of Anne's life.

The essays cover a range of topics but center on her son, Sam. Anne almost has an abortion when she becomes pregnant with Sam—her second pregnancy. The first pregnancy did end with an abortion. She talks to a minister who tells her she should imagine she has just made the decision to have the abortion and gauge what her reaction would be. Then she is to imagine she has decided not to have it and compare that reaction. She says that advice was sound and she decides not to have the abortion. She later uses this same tactic to decide whether Sam can go paragliding at seven years old. When she considers that she has refused permission, she is elated and uses that to make her decision.

Anne and Sam go to Mexico on vacation to swim with the seals, visit friends and interact with those in their church, St. Andrews. Anne calls it a "funky" church and says the people there become her family and she knows she can always find her way home from there. She is a writer by trade and has periods when she is having trouble writing, making the finances tough. She deals with a potentially serious blood disorder with Sam but it turns out to be nothing. She worries about her own health because her father died of melanoma. His death leaves a giant hole in her life and it is some twenty years before she admits she is a person without a dad and it is not going to change. She admits then she has always tried to mold men into her father's image and none of them are capable of filling that place in her life.

Anne claims to be a Christian but admits she is a bad Christian. She says some friends call her "Christian-ish." She refers to God as "he or she" and admits at the end of the last essay that she is not even certain to whom she is praying when she says, "Thank you, thank you, thank you." She says the two most important prayers are "Thank you" and "Please." The essays are sometimes humorous, sometimes poignant and all have a lesson most readers will understand and relate to.

More summaries and resources for teaching or studying Traveling Mercies: Some Thoughts on Faith.