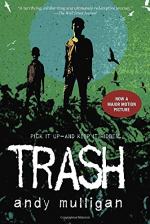 I was a trash boy since I was old enough to move without help and pick things up.
-- Raphael (Part One, Chapter 1)

Importance: In the beginning of the novel, Raphael illustrates the reality of his life, including the fact that him and children around him pick up trash for a living from their earliest days. As soon as they are able to physically do it, they work as dumpsite children, pitching in to survive.

He can be mean, it's true- but then again he's taken more beatings than me so maybe he's grown up faster.
-- Raphael (Part One, Chapter 2)

Importance: Here, Raphael talks about his best friend, Gardo, who has a very hard outer shell. While acknowledging the truth of Gardo's occasional meanness, Raphael points out that surviving in their particular world requires Gardo to be the way he is.

Raphael is my best friend but he's like a kid, always laughing, playing, thinking everything's fun, thinking it's a game-...
-- Gardo (Part One, Chapter 5)