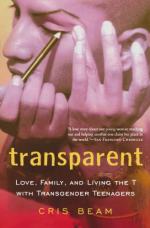 Beam, Cris
This Study Guide consists of approximately 59 pages of chapter summaries, quotes, character analysis, themes, and more - everything you need to sharpen your knowledge of Transparent.

This detailed literature summary also contains Topics for Discussion on Transparent: Love, Family, and Living the T with Transgender Teenagers by Beam, Cris .

In the first chapter, the author describes her initial encounters with experiences associated with transgender youth, which took place at a unique, casual, and purposeful school for transgender youth in Los Angeles. She describes volunteering there to teach writing; how her daily lesson plans had to be revised according to which students were there and how they were interacting with her, with each other, and with themselves; and how she established particularly close relationships with a few of the more regular students.

The most significant and more regular relationships, the author writes, was with a student whose genetic identity was male and whose birth name was Eduardo, but who identified more as female. During her acquaintance with him at the school, the author writes, Eduardo patterned his looks and behavior after pop music stars, first renaming himself Geri (after Spice Girl Geri Halliwell) and later Christina (after Christina Aguilera). This name, the author writes, is the one that stuck: through much of the book, however, the author uses “Eduardo” to refer to experiences Christina had when she was still externally identifying as male, such as Eduardo’s brief membership in a gang.

Another transgender woman whose life and experience are the focus of the author’s narrative attention is Foxxjazzell (referred to as Foxx), who came to Los Angeles confident in her belief that she was destined to be a star of music and movies. Throughout the book, the author describes Foxx’s attempts to realize this goal, as well as her desires to find, and stay in, a relationship with a boyfriend.

Throughout the book, as the author describes various aspects of the lives and struggles of Christina and Foxx. The author also describes how their experiences reflected, or manifested, the experiences of the transgender community in general. For example, she writes of how prostitution is often both a source of fast and easy money, and also a source of violence and disease. She considers the history of both the experience of being transgender (which, she says, goes back millennia) and how transgender individuals have been viewed, and are still viewed, by the legal system, the medical profession, and government.

Also throughout the book, the author examines her own attitudes towards transgendered individuals, relating them to her own experiences. These include her experiences as an out lesbian in a partnered relationship, and as a woman abandoned by her mother, as so many of the transwomen she comes to know and care for have been.

Much of the book is taken up with narrative of the deepening relationship between the author, her partner Robin, and Christina, for whom the author and Robin become legal guardians. The relationship is complex, volatile, and at times overwhelming, as Christina becomes involved with drugs, abusive relationships, prostitution, and crime. Eventually, however, the author writes that Christina became more and more able to take control of her life, eventually setting herself up in a long-dreamed of job and in an apartment of her own. She has successfully claimed an identity for herself, one that has come into being after a long, dangerous, and painful struggle to understand and accept that identity, as well as to understand and accept that she, as a transwoman, is worthy of health, connection, and love.

More summaries and resources for teaching or studying Transparent: Love, Family, and Living the T with Transgender Teenagers.