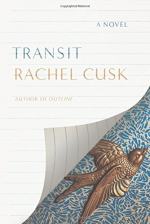 Rachel Cusk
This Study Guide consists of approximately 47 pages of chapter summaries, quotes, character analysis, themes, and more - everything you need to sharpen your knowledge of Transit.

This detailed literature summary also contains Quotes and a Free Quiz on Transit: A Novel by Rachel Cusk.

At the beginning of the novel, Faye tells readers that she has received a message from an astrologer claiming that her life is about to undergo a period of transit. Even though she does not believe that a real person wrote the email, she pays money to receive the entire report. This occurs during a period of time that builders are renovating a run-down house she has bought. She has sent her sons to her ex-husband’s house while the most extensive part of the work is being done.

She has neighbors who do not like her and complain that she makes too much noise. She had had problems with them before the renovations started when the children kept noise. The situation worsens when the renovations start. For the most part, she lets the builders, Tony who is Albanian, and Pavel who is Polish, deal with them. One day though, she goes to warn them that it will be a particularly noisy day and the reaction of the neighbors is so bad that she recommends to the builders that they delay the work. When they say that they had already talked to the neighbors about the noise and they had been nice to them, Faye discovers that the builders have made it sound as if she is a slave driver. Faye responds by reminding them that she is the one who will have to live in the house when the renovation project is complete.

While the renovations are being done, and the children are with their father, Faye has conversations with her hair dresser, attends a literary festival, works with a student who has writer’s block, teaches a class, goes on dates, has a chance meeting with her ex-boyfriend, has coffee with a friend of hers, and attends a party at her cousin Lawrence’s house. As she meets these people she asks them questions and eagerly takes in what they say about change, freedom, fate, love, abandonment, and power to try to apply their lessons to her life. When she works with her students, she probes them in order to improve their writing. When she talks to her sons, because they call, she finds out that they are fighting and that their father is not there.

As she talks to people, she begins to take power over her own life and find her identity as shown by the fact that one of her dates says her name, late in the narrative. The real change occurs when she goes to Lawrence’s house as it is here that she admits that her marriage actually began to end a year before her husband left when one evening she and her son were waiting for him to come home and she realized that she needed her freedom. Her sons had gotten into a fight while they were waiting and she attributes it to the fact that they sensed her anger. The party does not go smoothly, but it helps Faye realize that she cannot live her life based on other people’s realities, that love is not orderly and that she has to live. She leaves the next morning without saying goodbye feeling that change is underfoot.

More summaries and resources for teaching or studying Transit: A Novel.