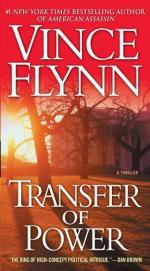 Vince Flynn
This Study Guide consists of approximately 40 pages of chapter summaries, quotes, character analysis, themes, and more - everything you need to sharpen your knowledge of Transfer of Power.

This detailed literature summary also contains Topics for Discussion and a Free Quiz on Transfer of Power by Vince Flynn.

President Hayes, advised by Dr. Kennedy and Director Stansfield of the CIA, authorizes American CIA spy Mitch Rapp to kidnap Hezbollah religious leader Fara Harut in the middle of the night after hearing rumors of an impending attack against the United States. Rapp escorts him to Germany, where Dr. Hornig begins to interrogate him and soon discovers Hezbollah has planned an attack against the White House for that very day. In the White House, Hayes is meeting with Democratic National Committee Chairman Russ Piper and his last-minute guest, Prince Kalib of Oman, who is actually international terrorist Rafique Aziz. Rapp notifies the Secret Service of the threat, and agent-in-charge Jack Warch evacuates the President to his bunker just as a team of terrorists led by Aziz takes the White House in a meticulously planned and flawlessly executed multi-faceted attack. He wires explosives around the exterior doors and windows of the White House so no one can escape.

With the President out of touch but safely stowed in his bunker, Vice President Baxter becomes the commander in chief. He is an opportunist and cares more for his career than for the safe and speedy termination of this incident. Aziz demands a large sum of money, and even though Mitch Rapp warns Baxter that Aziz will not be negotiated with, Baxter knows that a negotiation for the release of hostages will look very good to voters. Attorney General Tutwiler releases only part of the money and asks Aziz to release some of the hostages. Instead, the terrorist shoots two hostages in plain view of the cameras.

Dr. Kennedy and Director Stansfield send Mitch Rapp and Milt Adams into the White House through a ventilation duct to gather more information. Once inside, Rapp rescues a beautiful young reporter from assault by one of the terrorists. The two men continue to plant cameras and gather information, while outside Vice President Baxter continues to frustrate his military advisors who desperately want to rescue the hostages and the President. His chief of staff, Dallas King, leaks information to the Washington Post in order to make the Vice President look innocent of the failed negotiation.

Inside the bunker, President Hayes and Agent Warch realize that someone is drilling through the door. Mustafa Yassin, one of Aziz's compatriots, is slowly breaking into the bunker. Two more SEALs attempt to come into the building via the same duct Rapp and Adams used, but Aziz catches and shoots them. Later that day, Aziz broadcasts an appeal to the American people and appears quiet, remorseful, and sympathetic. The terrorist has planned everything down to the last detail. He asks the American people to help him ask the government to lift the UN sanctions against the starving people of Iraq. Baxter immediately begins to assert pressure in that direction, even as his military and intelligence advisors scream protests.

Inside the White House, Rapp verifies that the President's bunker door is under siege with the help of Rielly, and reports back to the CIA that immediate action is necessary. Baxter still will not order an invasion because he knows American voters will think him trigger-happy. Stansfield, frustrated with the Vice President's cowardice, gives Rapp permission to do whatever it takes to put the President back into communication with his advisors. Rapp disables the jammer and President Hayes regains power as commander in chief.

The military organizes a multi-pronged attack, utilizing many branches of special forces and Rapp's inside information. When Yassin finally finishes drilling and very nearly plucks the President from his bunker, American soldiers invade and kill the terrorists, liberate the hostages, and evacuate the building before the bombs explode. Aziz is the only terrorist to escape, having disguised himself as an FBI agent as the situation within the White House turned against him.

Hayes, reinstated, fires Dallas King, punishes Vice President Baxter, and give Mitch Rapp full authority to hunt down Rafique Aziz. Rapp does so, then finally gets to go on a date with Anna Rielly.

More summaries and resources for teaching or studying Transfer of Power.