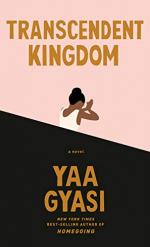 Yaa Gyasi
This Study Guide consists of approximately 55 pages of chapter summaries, quotes, character analysis, themes, and more - everything you need to sharpen your knowledge of Transcendent Kingdom.

The following version of this book was used to create this study guide: Gyasi, Yaa. Transcendent Kingdom. New York: Alfred A. Knopf, 2020.

The novel begins with the narrator Gifty, a 28-year-old neuroscientist pursuing her PhD at Stanford University, recalling a visit to Ghana when she was 11 years old. She had been sent there by her mother, who was undergoing a mental health crisis at the time. In the present, Gifty received a call from Pastor John, the leader of her mother's church back in Gifty's hometown of Huntsville, Alabama. Pastor John believed Gifty's mother was mentally unwell again. Gifty asked him to send her to California. When she arrived, she did not speak or eat; she went straight to Gifty's bed.

Gifty's mother and father met in Ghana. Gifty's mother called him “The Chin Chin Man” because the Ghanaian snack chin chin was his favorite food. They married and had a child, Gifty's brother Nana, then emigrated to the U.S., settling in Huntsville. They had Gifty a few years later. Gifty's mother found a sense of belonging and community at Pastor John's church, First Assemblies of God.

The novel shifts back to the present. Gifty's work at Stanford involved experimenting on mice as she sought to isolate the neurons in the brain responsible for addictive behavior. She chose this pursuit because her brother, Nana, died of a heroin overdose when Gifty was 11 years old. In many ways, Gifty felt she had replaced the evangelical religion of her childhood with science.

Gifty recalls attending one of Nana's soccer games, during which another child's parent used a racial slur in reference to Nana. Seemingly in response to this, Nana scored multiple goals, carrying his team to victory. Soon after this day, the Chin Chin Man (Gifty's father) claimed he was going to Ghana to visit his brother, but he never came back. Nana excelled at soccer, but quit the sport when his father left.

Shortly before the events of the novel's present-day storyline, Gifty dated a man named Raymond. She loved him, but she had trouble socializing with his friends because she did not feel comfortable with other people. When Gifty was an undergraduate at Harvard, she had a relationship with a female classmate named Anne. Gifty and Anne's relationship bordered on romantic, and they occasionally kissed.

In the present timeline, Gifty asked her colleague Katherine, a psychiatrist, to lunch, planning to talk to her about her mother's mental health. However, she found herself unable to broach the subject. Later, in the lab, Gifty inserted a fiber optic implant into a mouse's brain. Gifty then talked to her lab mate Han about Nana.

In high school, Nana joined the basketball team and played exceptionally well. The family gained respect and recognition from the community as a result. The Chin Chin Man called to tell his family that he was remarrying. Shortly thereafter, Nana tore some ligaments in his ankle during a basketball game and an emergency room doctor prescribed opioid pain medication. At church one day, Pastor John asked if anyone wished to devote themselves to Christ, as he did at the end of each sermon, and Gifty came forward, as she felt a genuine connection to God at that moment.

When Nana's prescription for the pain medication ran out, he began using street drugs. He often disappeared or came home intoxicated and enraged. Once, Gifty and her mother found him unconscious in the park and had to carry him into their car. At church, Gifty overheard two women gossiping about Nana and claiming that black people were more inclined to use drugs than people of other races. Nana went to rehab for 30 days, but he relapsed 14 hours after coming home and died of an overdose in a parking lot. After Nana's death, Gifty's mother tried to overdose on Ambien. Gifty found her and called an ambulance. Her mother sent her to Ghana when she was released from the hospital.

In the present, Gifty finally began talking to Katherine about what was happening with her mother. Gifty also grew closer with Han. Her mother gradually began to improve, even agreeing to visit Gifty's lab. However, Gifty still felt she was incapable of understanding her mother.

Gifty recalls ending her friendship with Anne because she asked too many personal questions about her life. Gifty ended her relationship with Raymond because he wanted to meet her mother, and he also read Gifty's private journal.

In the present-day timeline, Han asked Gifty to go on a date with him, and she agreed. She then had coffee with Katherine and told her all about her religious past. A short time later, she came home and discovered that her mother was not in her apartment. She called Katherine, who came right over. They drove around the neighborhood and finally found Gifty's mother, sitting in her pajamas under a tree. Gifty took her mother home and bathed her. Her mother told her, “Don't be afraid, God is with me” (260).

In a brief epilogue, Gifty explains that her mother's condition improved and she died in her own home, years later, of natural causes. Gifty married Han, and they now live together near Princeton University, where Gifty runs a lab. She often visits a nearby Episcopal church just to reflect on how important religion used to be to her.

More summaries and resources for teaching or studying Transcendent Kingdom.