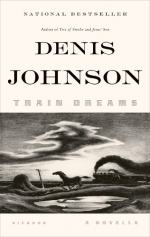 Related Topics
Denis Johnson
Jesus' Son: Stories
The Laughing Monsters
Tree of Smoke
Angels: A Novel
The Largesse of the Sea Maiden
The Stars at Noon

Denis Johnson
This Study Guide consists of approximately 42 pages of chapter summaries, quotes, character analysis, themes, and more - everything you need to sharpen your knowledge of Train Dreams.

The following version of this novel was used to create this study guide: Train Dreams, by Denis Johnson. First Edition. Farrar, Straus, and Giroux. 2002.

The story begins with an incident from relatively early in Grainier’s life. While working on the construction of a bridge for a railway line, Grainier got involved in a vengeful attack on a Chinese laborer accused of stealing. The laborer got away, but his fearful, angry reactions haunted Granier when he got home and, as the narrative suggests, for years afterwards.

The narrative then moves into an exploration of Grainier’s home life, which is portrayed as being quiet and peaceful. He adored, and was slightly awed by, his intelligent wife Gladys and his little daughter Kate. After returning from another construction job, he discovered that Gladys and Kate were presumed to have died in a fire that raged through the valley where they made their home. Grief and shock sent Grainier into an emotionally contained tailspin, and while he came to terms with their having died, his life and relationships were haunted by their loss. His sense of pain was eased somewhat when, as part of his efforts to teach an abandoned, half-wolf puppy how to bark, he began to howl himself and, as a result, felt some of the heavy feeling inside him shift and release. Not all his grief was released, however; narration describes how he carried the bulk of it with him for the rest of his life.

Time passed, and as nature returned to new life in the aftermath of the fire, Grainier constructed a cabin on the site where he lived with Gladys and Kate before the fire. He found new and different ways of making a living; he developed new and different friendships; and for several years was content to lead a relatively quiet life.

As he aged, Grainier found himself able to do less and less, and although he kept himself occupied, he spent more and more time alone at the cabin. One night, his solitude was interrupted by the appearance of a large pack of wolves, a pack in which there was also a wolf-girl. Grainier, who had heard rumors of such a girl, immediately and instinctively believed that she was his long-lost daughter. She, however, didn’t recognize him as anything other than a potential human threat, growling and snarling at him in the same way as her wolf companions. She did, however, allow him to treat a wound on her leg. She later escaped into the night, narration revealing that Grainier never saw her again.

The novella concludes with a description of how, when he was in late middle age, Grainier attended a traveling sideshow in which one of the attractions was a wolf-boy. As narration describes it, there was a strong sense of the wolf-boy being mostly performance (as opposed to actual identity). But then, as the wolf-boy’s act progressed and he started to howl, narration describes how suddenly and instinctively, members of the audience (presumably including Grainier: the narrative is not specific) felt that there was something more mysterious, more natural, and more animal-like going on.

More summaries and resources for teaching or studying Train Dreams.