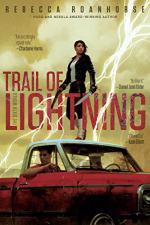 Rebecca Roanhorse
This Study Guide consists of approximately 38 pages of chapter summaries, quotes, character analysis, themes, and more - everything you need to sharpen your knowledge of Trail of Lightning.

This detailed literature summary also contains Quotes and a Free Quiz on Trail of Lightning by Rebecca Roanhorse.

The following version of this book was used to create the guide: Roanhorse, Rebecca. Trail of Lightening. Saga Press, 2018.

The novel is set in Dinétah, populated by the Diné or Navajo people. It is isolated from the rest of the world by a 50 foot wall, constructed to protect the population after the Energy Wars and the Big Water. Maggie Hoskie, the novel’s first person narrator, begins by describing her trip to Lukachukai to hunt a monster that had kidnapped a young girl. She kills the monster but also kills the girl, believing her to be infected after the monster’s attack. Maggie has been hunting monsters since her clan powers were awakened when witches slaughtered her grandmother.

She takes the head of the monster to a medicine man she is close with, Tah, in Tse Bonito. Tah introduces Maggie to his grandson, Kai, believing he would make a good partner in her hunt for the truth about the monster she has killed. Maggie and Kai go to Crownpoint to seek out information in the library there. When they arrive, they see that all the townspeople have been killed by the monsters, the tsé naayéé’. In the library they collect CDs with the oral histories of their people to try and uncover more information.

Returning to Maggie’s trailer, Maggie and Kai encounter Coyote. He asks Maggie to go somewhere for him and fight against a god, handing her colored, feathered rings to assist her in her mission. Maggie, ignoring Coyote’s request, goes to Tse Bonito when she hears of a fire there. She and Kai discover that Tah’s house has been burnt down and that he is presumed dead. A law official of the Law Dogs, Longarm, tries to kill Kai as he had warned him and Maggie not to return. Maggie kills him before he can kill Kai. She takes the injured Kai to a property run by Grace Goodachre, a refuge for those on the run. Here, Maggie notices Kai heals very quickly realizing he has strong healing powers. Maggie, Kai and Grace’s children, Rissa and Clive, go to hunt tsé naayéé’ they hear of attacking a nearby town. Rissa is injured but the monsters are defeated when Kai summons his powers and creates a fire tornado.

At Grace’s, Coyote comes to visit Maggie. He tells her of a tool that can help her fight the tsé naayéé’, the Fire Drill. He sends her to a club, the Shalimar, to meet Mósí, a cat- like immortal being that possesses the drill. Here Maggie is manipulated into fighting her old immortal mentor and ex, the Monster Slayer, Neizghání. She realizes the Coyote has manipulated them into fighting but is angry at Neizghání from abandoning her a year ago. Neizghání almost kills her but Kai heals her.

Maggie wakes up at Grace’s and constructs a plan to kill Neizghání, believing him to be responsible for the creation of the monsters. Kai encourages her and they kiss. They go to Black Mesa with Rissa, Clive, and the mercenaries, the Thirsty Boys. Here, Maggie discovers that Coyote had created the monsters and was also responsible for the death of her grandmother, wanting to summon her powers so that she could one day kill Neizghání, who he has a grudge against. Maggie kills Coyote and tries to stop Neizghání from killing her army. He tells her he cannot let Kai go as his powers are too dangerous. Kai reveals that he has the ability to convince people to help him and Maggie is upset by the revelation that he has not been completely honest with her. Maggie kills Kai, believing he will rise after death. She binds Neizghání by using the Coyote’s rings and he is sucked into the earth. Maggie returns to her trailer finding Tah there and they wait for Kai together.

More summaries and resources for teaching or studying Trail of Lightning.