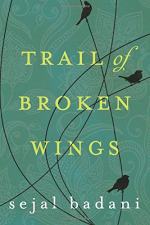 This detailed literature summary also contains Quotes and a Free Quiz on Trail of Broken Wings by Sejal Badani.

In Trail of Broken Wings by Sejal Badani, Sonya is returning home after many years. She has received word that her father, Brent, is in a coma. This is the first time that a reluctant Sonya has been home since she left after college graduation. She knows that returning means that she must face the years of physical and psychological abuse Brent inflicted on her, her sisters, and her mother. As Sonya reconnects with her family and faces accusations of neglect, she takes on a temporary position at the hospital, where she teaches photography as a form of therapy to the patients. There, she begins a friendship with Brent's doctor, David. The friendship starts to blossom into a romance, though Sonya is afraid of getting too close to anyone. She eventually reveals that she is addicted to pornography where men hurt women. She thinks that she is too damaged to love anyone. David believes otherwise. He persuades Sonya to believe in herself and give love a chance.

Ranee, Sonya's mother, has lived with the guilt for not protecting her daughters from her husband for many years, though she knows she did what she could to survive herself. Despite everything, Ranee stayed with Brent until he slipped into the coma, at which point she immediately wrote for Sonya, begging her to come home. Through the course of the novel, it is revealed that Ranee was slowly poisoning Brent, so that Sonya could finally be free to come home. Ranee only told her she wasn't wanted so that Sonya could escape and have a better life. Seeing that Sonya is holding David at bay because she is afraid of love, Ranee tells him the truth about what she did to Brent, asking David to let Sonya know it was out of love. Sonya and David decide to destroy the evidence.

Trisha, one of Sonya's sisters, was always Brent's favored daughter, whom, for whatever reason, he did not beat. The most beautiful of the girls, Trisha has been treated like a princess. She marries a man who can provide her with a lavish lifestyle. Trisha loves her husband, Eric, but keeps a terrible secret from him. Though he is eager to start a family, she is afraid to bring a child into the world after her abusive childhood. So, she uses birth control without telling him. When Eric discovers the truth, he leaves her. This triggers a memory for Trisha which she has kept buried for years. Although her father never beat her, he raped her when she was a teenage girl. She had since blocked out the memory. Devastated by the return of the memory, she re-evaluates the close relationship she once thought she had with her father, Trisha finally opens up to Eric and tells him the truth. Eric agrees to go to counseling with her and help her work through her memories.

Marin, the oldest daughter, believed she could win back her father's love by becoming successful. A deeply disciplined woman who has built many walls around herself, Marin pushes her teenage daughter, Gia, to strive for perfection. Marin holds her husband, Raj, at a distance. When Marin learns that Gia has been beaten by her boyfriend--which she accepts, because Brent told her he used to beat Marin--Marin realizes the damage she has done to her family by not being honest with them, especially when Raj threatens to leave and Gia wants to go with him. Marin finally opens up to her daughter and reveals her vulnerability to save her family.