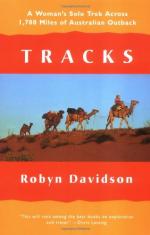 Robyn Davidson
This Study Guide consists of approximately 27 pages of chapter summaries, quotes, character analysis, themes, and more - everything you need to sharpen your knowledge of Tracks.

This detailed literature summary also contains Topics for Discussion and a Free Quiz on Tracks by Robyn Davidson.

Robyn Davidson is a young woman from Queensland, Australia, in the 1970s. She decides that she wants to get some camels and make a huge trek across the great Australian desert. It is a lot of work, and the experience changes her into a different person.

Robyn arrives in Alice Springs, the last real town at the edge of the desert, with no money and no knowledge about camels, the desert, survival, or even basic tool use. It is a rough frontier town, and she struggles against sexism as she tries to learn enough about camels and get some of her own. She is deeply bothered by the victimization of the Aboriginal people by the Australian government, and the racism the whites have toward the poverty-stricken, homeless Aborigines. The Aborigines live very closely with the land, so when they are forced off of their land, they feel rootless and culture-less. Part of Robyn's motivation to take her trip is to get to know the Aborigines better. After two years and two apprenticeships, Robyn finally obtains four camels, and "National Geographic" magazine agrees to sponsor her trip. Robyn is excited that she is finally going to realize her dream, but she is disappointed that someone else is involved, since she wants the trip to be hers alone.

Robyn starts off on her trip, sometimes accompanied by Rick, a photographer from "National Geographic" and a close friend to Robyn. Another portion is spent in the company of Eddie, an old Aborigine man who teaches Robyn the importance of paying attention to the world around her and feeling that she is one with it. He also helps her let go of her worries about making good time or being on a schedule. Robyn faces many dangers in the desert, especially wild bull camels. She shoots these when they attack her, but when her rifle jams, she must learn to fight them off with sticks and rocks. At times, Robyn goes somewhat crazy from being by herself in so much desert, and when she is able to give in to the Aborigine mindset, she finds herself stripped of all unnecessary worries and inhibitions, as though she can do anything.

Toward the very end of Robyn's journey, her dog, Diggety, dies from eating poisoned meat. Robyn is devastated by the loss of her only friend. Soon, she encounters a crowd of news reporters, who have heard about the famous "camel lady." Robyn hates tourists and paparazzi, and in her desert mentality, cannot begin to deal with interacting with these people. Fortunately, Rick shows up and sends the reporters off on a wild goose chase, while Robyn finishes the final leg of her journey. Afterward, Robyn wishes that she could go back to the clarity and solitude of the desert.