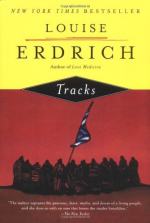 Louise Erdrich
This Study Guide consists of approximately 56 pages of chapter summaries, quotes, character analysis, themes, and more - everything you need to sharpen your knowledge of Tracks.

Nanapush, an older Native American, is sharing the past with Lulu, also Native American, in hopes of preventing her from making mistakes. He begins talking about 1912, and how natives are dying, and whites are trying to buy their land. After her parents die, He and Pukwan rescue a sick Fleur Pillager from her family's cabin. Nanapush helps her bury her family. They mourn for their lost families, but Father Damian, a priest on the reservation, revives them. Even though Nanapush asks her to stay with him, Fleur wants to go home, despite knowing the land is in danger. Having lost her mother and sisters, mixed-blood Pauline lives with her aunt Regina and Dutch. Pauline, who is suspicious of Fleur and her magical powers, works with Fleur in a butcher shop in Argus. Fleur keeps winning card games with men who work there, and they attack her. In retaliation, Fleur causes a storm that destroys the areas associated with her. The men are found dead in a locker, but Pauline reveals she locked the door.

After Argus, Fleur comes back pregnant. She meets and lives with Eli Kashpaw, much to her mother Margaret's dismay. Fleur gives birth to a girl named Lulu. Nanapush gives her his name and names her after his dead daughter. Nanapush tells adult Lulu how they try to fight starvation and losing their land. After Argus, Pauline hates living with Regina and Dutch who is sick because of Argus. She lies to Bernadette Morrissey and gets to stay with her and her family on their farm. She helps Bernadette with the dead. She starts going to Mass where she sees Margaret and Lulu. She is obsessed with Eli and Fleur, but after they pay her no attention, she turns to Napoleon, Bernadette's brother. With Fleur's cousin Moses' help, she bewitches Eli and Bernadette's daughter Sophie to get together. As a result, Sophie has a breakdown in Fleur's yard, and Fleur is distant from Eli for a while until Nanapush tells him how to win her back. The statue of the Virgin appears at Sophie's breakdown, and Pauline has a religious transformation. Nanapush and Margaret grow closer, and they are attacked by Clarence, Bernadette's son, and Lazarre for the Eli-Sophie incident and other matters. Fleur gets her own revenge on Clarence and Lazarre. Nanapush and Nector, Margaret's son, try to snare Clarence, but they have mercy on him.

Pauline learns she is pregnant by Napoleon, and Bernadette stops her from getting rid of the baby. Bernadette has to force the child out of Pauline and agrees to keep the baby who is named Marie. Pauline goes to the convent and punishes herself in the name of religion. She tries to convert those at Fleur's, but is unsuccessful. Fleur become pregnant again, and the baby's father is a mystery. Pauline is there when Fleur loses the baby and is involved with Fleur's magic. Nanapush helps heal Lulu after she gets frostbite from running to get help while Fleur is losing the baby. Those at Fleur's are starving and behind in their land payments. Fleur's cousin Moses helps Nanapush to cure a despondent Fleur, but Pauline interferes with trying to save them. Pauline is burned. She recovers from her injuries at the convent and has a religious struggle. She has a breakdown as she floats in Nanapush's boat on Lake Matchimanito. After coming back to shore, she thinks she is confronting the lake monster, who she thinks has always helped Fleur and may have been the father of her second child. It turns out she murdered Napoleon, and she runs back to the convent. After recuperating from her breakdown, she becomes a nun and gets a new name, Leopolda, and is going to teach at a Catholic school in Argus.

Nanapush thinks Nector and Margaret paid for all their land but learns there was enough money for only Margaret's land. Eli tries to get Fleur to marry him and live at his mother's, but Fleur refuses. She is accused of murdering Napoleon, and it is a certainty she will lose her home. Before she leaves, Fleur gets revenge on the men from the lumber company with her magic. She sends Lulu to boarding school to protect her. Nanapush finally gets involved with the government and is able to take Lulu away from the school with Margaret.