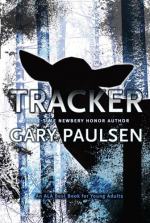 Gary Paulsen
This Study Guide consists of approximately 21 pages of chapter summaries, quotes, character analysis, themes, and more - everything you need to sharpen your knowledge of Tracker.

This detailed literature summary also contains Quotes and a Free Quiz on Tracker by Gary Paulsen.

Tracker is a teen novel by Gary Paulsen in which thirteen year-old John Borne comes of age while hunting alone near the family farm. The hunt takes place after his grandpa is diagnosed with cancer. At the age of four, John came to live with his grandparents after his parents were killed in a plane crash. John came to deeply love his grandparents, their home, and their traditional lifestyle. Two weeks before the novel begins, Grandpa is diagnosed with terminal cancer. He does not have long to live. By the beginning of the novel itself, John and his grandma, Aggie, are still reeling from the news.

Grandpa Clay knows that when he is gone, the farm and Grandma will depend on John. Grandpa decides that John must go hunting alone this year during deer season, as well as take on additional chores around the farm. John enjoys the chores and hard work, because he feels like he is accomplishing something. John also accepts the additional work, knowing full well what will be expected of him in the coming months. At the same time, John is sad to have to go hunting without Grandpa, because they have always done everything together.

When deer season arrives, John heads out into the woods alone, bound for the swamp where deer hunting is good. John and his grandpa have always hunted only for survival. They do not kill for fun or for any other reason. They only kill for meat and providing for themselves with other parts of the deer, such as tallow for candles. John soon finds the trail of a doe, and he begins to follow her tracks. For hours and miles, John follows the doe, catches up to her, loses her, or finds himself unable to shoot her. He cannot understand why. But through the night, John comes to realize that he does not want to kill the doe because he feels that he is a part of the doe and the doe is a part of him. He feels as if he is a part of nature, of a natural order of life and death.

When John finally catches the doe, who has collapsed from exhaustion, he chooses not to kill her. Instead, he reaches out and touches her. Symbolically, he sees the doe as his grandpa. His refusal to kill this particular doe symbolizes that he will somehow save Grandpa. John comes to realize this is not the case, but he still feels as if he has a healthier respect not only for nature, but for life and death as well. Death, he accepts, is a natural part of life. John’s journey into the woods and his taking on of more responsibilities take him from late-childhood to young-manhood. Back home, John announces he will do all the chores the next day so Grandpa will not have to do them. Instead, Grandpa can rest.

More summaries and resources for teaching or studying Tracker.