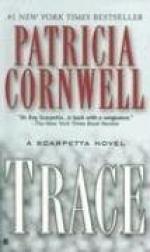 This detailed literature summary also contains Topics for Discussion and a Free Quiz on Trace by Patricia Cornwell.

In Trace, Dr. Kay Scarpetta returns to her former home of Richmond, Virginia to consult on a high-profile murder. Young Gilly Paulsson has been found dead in her bed under suspicious circumstances, but Virginia's office of the chief medical examiner (OCME) has been unable to determine a cause of death. Dr. Joel Marcus holds the position of chief medical examiner (CME) which once belonged to Scarpetta and he decides to call his predecessor in to consult on this puzzling case. It is not Scarpetta's expertise, however, that Marcus seeks. Marcus hopes to use Scarpetta to deflect any criticism his office might face over the Gilly Paulsson case. When Scarpetta arrives in Richmond with her friend and fellow investigator, Frank Marino, she finds she has stepped into a political minefield.

Gilly Paulsson's father, Dr. Frank Paulsson, is an informant for Homeland Security and uses his political clout to put pressure on the OCME to solve Gilly's case. Unfortunately, Dr. Paulsson is also a sexual deviant who not only molests his female patients, but quite possibly has molested his daughter as well. His ex-wife, Suzanna Paulsson, participated in violent sex games with her husband and his friends in the home where Gilly lived. This negative home environment opens the door to the possibility that Gilly's murderer may have been Dr. Paulsson or one of the many guests who had been invited to his home to participate in his twisted sexual practices.

Suzanna Paulsson is afraid of having her bizarre sex life exposed in the investigation and in order to gain some leverage in the case, she lures investigator Frank Marino into her home, drugs him and violates him sexually, causing him severe injury. When Marino wakes the next morning, Suzanna accuses him of rape and Marino is so confused by the intoxicants she put into his system that he does not remember what happened. Luckily for Marino, Scarpetta is not only a terrific doctor, she is also a terrific investigator and an even better friend. She is able to determine, based on Marino's injuries, that Suzanna has set him up. Scarpetta threatens Suzanna with exposure if she dares file a fake rape charge against Marino and Suzanna is forced to drop the matter.

Meanwhile the real killer, a man named Edgar Allan Pogue, is stalking Scarpetta's niece, Lucy. Just prior to the beginning of the novel, Pogue attacked Lucy's girlfriend Henri but was interrupted before he could finish the job. Henri was found alive in Lucy's master bedroom in the same position Gilly Paulsson's body was found and bearing the same distinctive pattern of injuries. Unfortunately, Lucy and her aunt Scarpetta don't share the details of their cases with one another, so Scarpetta has no way of knowing that the killer she seeks shares the same M.O. as the assailant who attacked Henri.

Pogue had worked for Scarpetta in Richmond when she had been the CME for the state of Virginia. He met her niece, Lucy, at that time and had developed a psychotic fixation on her. After Scarpetta and Lucy left town, Pogue was able to track down the reclusive Lucy through an interview that Henri inadvisably gave to The Hollywood Reporter. Pogue had been squatting in the former OCME building which was abandoned some eight years before the events of the novel. When the novel begins, the old building is at last being torn down and Pogue has been forced to move his collection of dead bodies from the basement into the home of one of his murder victims. Pogue now lives in this home, located immediately behind the Paulsson home and it was through his bedroom window that Pogue first spotted Gilly.

Eventually, Scarpetta and Marino identify the killer as Edgar Allan Pogue and all the pieces fall into place. Scarpetta is able to track her killer through the microscopic trace evidence found at the scene of the Paulsson case. The evidence is identical to traces lifted from the body of a construction worker in an unrelated accidental death case and Dr. Marcus accuses Scarpetta of contaminating the evidence. Before Marcus can hang her out to dry, however, Scarpetta is able to prove that the evidence is a valid link between the two cases and it points directly to the involvement of Edgar Allan Pogue. All ends well for the major characters of Trace. By the end of the novel, Marino's reputation is secure, Lucy is safe from her stalker, the detestable Dr. Paulsson has been driven from his medical practice and Scarpetta has redeemed herself in Richmond.