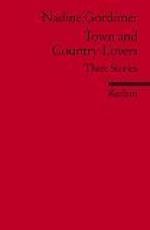 Nadine Gordimer
This Study Guide consists of approximately 43 pages of chapter summaries, quotes, character analysis, themes, and more - everything you need to sharpen your knowledge of Town and Country Lovers.

Gordimer won the Booker Prize for The Conservationist (1974). In this novel, a wealthy pro-apartheid industrialist in South Africa struggles with his guilt when a group of poor black people settle on part of his private land.

"Jump" and Other Stories (1991) is Gordimer's most recent collection of short stories. These stories represent Gordimer's observations of post-apartheid South Africa, in which race relations remain strained and awkward.

Set in South Africa, Alan Paton's Too Late the Phalarope (1953) is about Pieter, a white man who has an affair with a black woman. When this affair becomes public, he suffers the consequences with his family and his community.

Nelson Mandela's book, Long Walk to Freedom: The Autobiography of Nelson Mandela (1995), tells the inspiring and harrowing tale of life in apartheid South Africa. Mandela recalls his days as an activist, his twenty-seven years in prison...

More summaries and resources for teaching or studying Town and Country Lovers.

Town and Country Lovers from Gale. ©2005-2006 Thomson Gale, a part of the Thomson Corporation. All rights reserved.