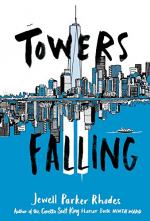 Jewell Parker Rhodes
This Study Guide consists of approximately 67 pages of chapter summaries, quotes, character analysis, themes, and more - everything you need to sharpen your knowledge of Towers Falling.

During the summer, Deja and her family moved into a homeless shelter. Now, Deja is starting fifth grade at a new school. On her first day of school, she meets a boy named Ben and a girl named Sabeen who seem to want to be her friend. At first she is defensive, afraid they will not like her when they learn she is homeless. By the end of the first day, though, Deja thinks she is going to like the school.

Brooklyn Collective Elementary is more progressive than any school she has ever attended. The teachers are young and creative. They teach concepts like critical thinking and introduce a controversial topic -- the 9/11 terror attacks on the World Trade Center Towers. It is the fifteenth anniversary of the attack and the school believes including it in curriculum will help students who were not even born at the time have a better understanding of the magnitude of the attacks as they kicked off the nation's war on terror.

But Deja's Pop does not want her learning anything about the Towers. He even walks her to school one day with the intent of transferring her to another school. When he talks with her teachers and principal, however, he decides against it; but he still will not talk with Deja about why the Towers upset him so much. She eventually finds a name tag in his suitcase that shows he was employed at the Towers, but she dare not bring it up to him for fear of upsetting him more.

It is not until Deja and Ben skip school to visit the Tower Memorial that Pop sees just how determined Deja is to know more about the Towers. He finally tells her his story. He was a security guard in the North Tower. He was able to save one elderly lady but the building completely collapsed right after he got her to the ambulance. He has felt guilty for sixteen years about not being able to help save more of his work family. His honesty with her builds a bond of trust between the father and daughter and she sees that her dad is not a loser; he is a hero. Her encouragement seems to help him recover.

At the end of the story, Deja has two great friends and a family that is putting itself back together again. They are leaving the shelter for a subsidized apartment, and the family is rebuilding its bond while also forming ties with the families of Deja's friends.

More summaries and resources for teaching or studying Towers Falling.