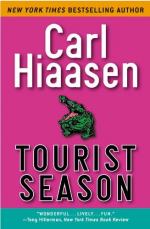 This detailed literature summary also contains Topics for Discussion and a Free Quiz on Tourist Season by Carl Hiaasen.

a reporter he once worked with, a wanna-be Cuban terrorist, a black former Miami Dolphin football player, and a Seminole Indian trying to make amends for the demise of his ancestors and homelands. The overall goal of the bad guys is to cause tourism in the Miami area to be so dangerous that people will leave the area en masse and allow it to return to the wilderness it was before development, thus allowing the animals and birds to take back the land that was once their natural habitat.

When a Shriner from Illinois disappears while attending a convention in Miami almost no one except his wife and a few other Shriners notice. However, when the president of the Greater Miami Chamber of Commerce, B. D. "Sparky" Parker, ends up drowned in a suitcase with his legs cut off almost everyone notices. It is especially peculiar when the coroner discovers he has been slathered in coconut tanning oil and has a souvenir rubber alligator stuffed down his throat. It also does not go unnoticed that he was wearing a suit when he disappeared, but when he is found he has on a Jimmy Buffet t-shirt and Bermuda shorts.

A man named Brian Keyes is hired to find the killer when a Cuban is mistakenly jailed for the murder. Keyes has a background as a newspaper reporter so he has contacts with the paper and the police department. As he begins his investigation the man he was to represent kills himself in jail, and the newspapers all close the case immediately as tourist season is just beginning and they want to end any hint of violence.

However, Keyes is convinced the wrong man was jailed and begins to look into the case further. He notices an article in the paper about a young woman from Canada being kidnapped and wonders if there is any connection.

At about the same time a reporter Keyes once worked with disappears, and Keyes' old boss from the newspaper hires him to find the man, a popular writer named Skip Wiley. Wiley has gotten a bit eccentric in the last few months and it is felt he is just off sulking somewhere.

Killings and unusual events begin to happen to tourists, but the chamber of commerce tries to get the police to play them down so as not to create bad publicity for the community. When a helicopter drops live snakes onto an ocean liner full of tourists and travel writers, the story begins to make news all over the U.S. Then a plot is uncovered to kidnap the queen of the Orange Bowl, and the police must respond with unprecedented force. The reason for the killings and kidnapping of tourists is suspected to be a terrorist plot to ruin the tourist business and thus make people leave the area and let it go back to the animals and birds that were displaced when the Miami area was developed for tourists. Skip Wiley and three other men become the suspects as the police and Brian Keyes try to outsmart the terrorists.