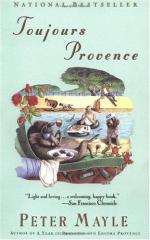 Plot Summary
+Chapters Summary and Analysis
Les Invalides
The English Écrevisse
Boy
Passing 50 Without Breaking the Speed Limit
The Singing Toads of St. Pantaléon
No Spitting in Châteauneuf-du-Pape
Buying Truffles from Monsieur X
Napoléons at the Bottom of the Garden
As Advertised in Vogue
Mainly Dry Periods, with Scattered Fires
Dinner with Pavarotti and a Pastis Lesson
The Flic and The Mouthful for Mouthful with the Athlete Gourmet
Fashion and Sporting Notes from the Ménerbes Dog Show
Inside the Belly of the Avignon and Postcards from Summer
Arrest that Dog! And Life through Rosé-Tinted Spectacles
Free Quiz
Characters
Objects/Places
Themes
Style
Quotes
Topics for Discussion
Order our Toujours Provence Study Guide

Peter Mayle
This Study Guide consists of approximately 30 pages of chapter summaries, quotes, character analysis, themes, and more - everything you need to sharpen your knowledge of Toujours Provence.

This detailed literature summary also contains Topics for Discussion and a Free Quiz on Toujours Provence by Peter Mayle.

Toujours Provence, by English author Peter Mayle, is a light take on life in the Provence region of France. The book is a series of interesting and comical anecdotes about the transition of foreign residents transplanted from London to a new life in the South of France.

Mayle introduces the reader to the Provencal first by focusing on an ailment that has become a national epidemic—some twenty percent of Frenchmen reportedly suffer from chronic constipation. Food and drink is such an important element in the lives of the French that it is deemed to be as vital as the air they breathe. The richness of the food and the amounts ingested by the French apparently have contributed to their gastronomical ailments.

Mayle's first book, A Year in Provence, was a best seller. Mayle makes an effort to respond to all of his fan mail which, in some aspects, backfires on him. Some fans become unwanted pen pals, asking Mayle's opinion on everything from French tax laws and the education system to his personal advice on whether they should move to the Provence. Some fans become so bold that they invade his personal space. He comes into his house from the yard one day to find an uninvited couple sitting in his living room, expecting conversation and perhaps some pastis.

The Mayles live in the Lubéron section of the Provence. This region is depicted in Vogue magazine as a chic locale where the elite and sophisticated vacation. Such publicity causes an invasion of unwanted tourists in the summer months which the locals, including the Mayles, must suffer through. The commercialization of the picturesque region, in addition to the crowds and traffic caused by the influx of visitors during the these months, is a downside to the locals, who cherish the charming and quaint elegance and laid-back lifestyle of the Lubéron.

Mayle focuses on local customs and some of the eccentric residents of the region. The intrigue and passion surrounding the French delicacy known as truffles is surprising and entertaining. The love of food and drink, especially the liqueur called pastis, is a focal point in many of the episodes contained in the book. While performing in his concert, Pavarotti reportedly dines on French food while taking breaks between arias. A passionate gourmet takes Mayle to lunch, explaining that he wears running suits when he dines out so that his stomach can comfortably expand. There are summer fetes and dog shows and picnics and visits to the famous wine caves of the Châteauneuf-du-Pape and to village pastis bars.

On a visit to London, Mayle decides he could never live in his hometown again. The Provence has become his home and he admits that he has "gone native." His life, in essence, has improved. He has no regrets, few complaints and enjoys many pleasures from his transplanted life in the Provence.

More summaries and resources for teaching or studying Toujours Provence.