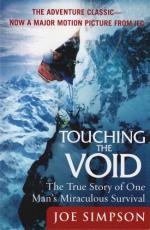 Plot Summary
+Chapters Summary and Analysis
Beneath the Mountain Lakes
Tempting Fate
Storm at the Summit
On the Edge
Disaster
The Final Choice
Shadows in the Ice
Silent Witness
In the Far Distance
Mind Games
A Land Without Pity
Time Running Out
Tears in the Night, Epilogue
Free Quiz
Characters
Objects/Places
Themes
Style
Quotes
Topics for Discussion
Order our Touching the Void Study Guide

Joe Simpson (mountaineer)
This Study Guide consists of approximately 32 pages of chapter summaries, quotes, character analysis, themes, and more - everything you need to sharpen your knowledge of Touching the Void.

This detailed literature summary also contains Topics for Discussion and a Free Quiz on Touching the Void by Joe Simpson (mountaineer).

Joe Simpson describes crawling out of his tent early one morning from his campsite on the Cordillera Huayhuash in the Peruvian Andes. He is camping with Simon, a man with a rather reckless spirit that Joe admires. The third of their party is a man named Richard. He is an explorer of sorts and his purpose is to remain with the gear while Joe and Simon are out climbing. As Joe and Simon make several practice runs on smaller climbs, Joe is pleased that the two of them are well-matched.

They make their final preparations and set off on their climb. They encounter several minor problems but make relatively good time on the ascent. They take turns leading the way with the other serving as the belay point. They are roped together on a one hundred, fifty foot rope. They reach the summit on time and Joe notes that he feels the familiar sense of anticlimax. They begin the descent and Joe falls, breaking his leg and ankle. It takes Simon some time to traverse the distance between them, catching up. When he does, he notes the seriousness of the situation at a glance. He says that he sees in Simon's eyes that he does not expect Joe to make it off the mountain. Joe says that the look is distant, as the look one gives a condemned animal that cannot be helped. Despite that, they do not discuss the issue and Joe resolutely begins his way down the mountain. They soon hit upon a way to cover distance more quickly by creating a belay point for Simon—a seat of sorts out of snow that will hold his weight. From this point, Joe is lowered on a rope. At the end of the rope, Joe builds a new belay point while Simon catches up.

On one of the descents, Joe falls off an outcropping and into space. For more than an hour, Simon holds his position, hoping that Joe will begin to climb the rope. He does not feel anything to indicate that is happening and a snow storm combined with the distance prevents conversation. Joe hangs there, expecting he is going to die at any moment. He accepts that it will happen, then is suddenly falling. He believes Simon has fallen and is now plummeting toward the edge but later discovers that the rope has actually been cut. Simon, deciding he cannot help Joe by dying himself, makes the decision to cut the rope. They each spend the night then Simon, believing Joe has died, completes the descent. The next day, Joe pulls himself from the crevasse where he has miraculously landed on a ledge and begins the agonizing journey to base camp. His days pass in a haze of pain and falling but he continues.

As he nears the camp, he fears that Simon and Richard might have already left but finds his way near the tent and summons Simon by yelling. Joe says he does not blame Simon for his decision to cut the rope, nor for believing that he had died in the fall. They spend the remainder of the night in the camp and make the two-day trek by mule to a Peruvian town where they rent a truck to make their way to Lima. Joe undergoes a series of surgeries on his leg and within ten weeks is again ready to climb.

More summaries and resources for teaching or studying Touching the Void.