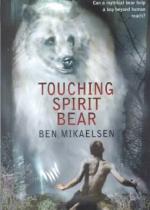 Ben Mikaelsen
This Study Guide consists of approximately 49 pages of chapter summaries, quotes, character analysis, themes, and more - everything you need to sharpen your knowledge of Touching Spirit Bear.

Cole Matthews is a teenager with a troubled childhood. He is routinely abused by his father and the abuse leads to a deep, constant anger that Cole can't control. His mother witnesses the abuse but generally does nothing to stop it, leading Cole to believe that no one cares for him. Cole believes that everyone is making fun of him unless he makes them afraid of him. He routinely fights and feels that he has the upper hand by his sheer ability to win.

Cole breaks into a store where he steals and vandalizes the business. He then brags about it at school and a fellow student, Peter Driscal, tells on him. When Cole finds out who turned him in, he attacks Peter. The brutal assault leaves Peter with permanent injuries and puts Cole in the legal system. Though his parents have always paid his way out of trouble in the past, Cole is now facing real jail time for the assault.

Cole attracts the attention of a parole officer named Garvey. Garvey is a member of the Tlingit Indian tribe of Alaska and a proponent of a new program called Circle Justice. The program brings together criminals, victims, court officials, and members of the community along with family members and friends of anyone involved. Cole sees the program as a way of avoiding jail but doesn't embrace the possibility of changing himself in the process.

The group agrees that Cole should spend a year on an island off the Alaskan coast. He is to spend the time alone with the exception of routine visits by a local tribe elder, Edwin, who will bring supplies. Cole agrees to go but doesn't plan to stay. As soon as he is alone, he burns down the cabin built for him by Edwin and paid for by Cole's father. Then he tries to swim off the island but goes against the tide and is forced back to land.

He plans to make another swim the following day, this time using the tide to his advantage, but he has an encounter with a large white bear, the Spirit Bear. Cole is furious when the bear isn't afraid of him and he attacks it. The bear rips Cole to pieces, breaking bones and making it impossible for Cole to even stand. Cole fears he will die but manages to live by eating worms, bugs, and a mouse, and opening his mouth to the near-constant rain. Just when he knows that death is very near, the bear returns and stands over Cole. He reaches out and touches it without understanding why the bear doesn't attack.

Garvey returns to check on Cole and takes him for medical treatment. Six months later, Cole again stands before the Circle Justice and the group reluctantly gives him another chance. This time, Cole has to pay for all his supplies and has to build his own shelter. Garvey and Edwin guide him on the first steps toward healing but as the year nears its end, Cole finds there is still something missing. When he learns that Peter is so depressed that he has attempted suicide, Cole begs for Peter to have time on the island, believing it will heal Peter as it has healed Cole.

Peter's parents agree to the plan because they fear that Peter won't get better until he faces his fears. Under Garvey's watchful eye, Peter and Cole spend weeks together on the island. Peter is bitter and often takes out his anger on Cole. One day, Peter physically strikes Cole. Cole refuses to fight back or to run away, which makes Peter furious. The beating continues until Peter is too exhausted to keep hitting Cole. As Peter sobs, Cole reaches out and the two boys are in an embrace that begins the healing process between them.

As they hold onto each other, Cole realizes that the Spirit Bear is standing a short distance away. Peter learns what Cole has already realized. The bear is only present when the humans are able to lose themselves.