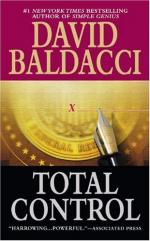 "Sidney has never wanted to be financially dependent on anyone else. She looked at Jason. If she was going to tie her economic survival to one person, who better than a man she had moved almost from the moment she had laid eyes on him?" (Chapter 3, p. 39)

"...CyberCom's technology will completely reinvent and dominate how information is processed over the Internet. And as far as the high-tech business is concerned, that's like Moses coming down the mountain with the Commandments; there's no substitute." (Chapter 7, p. 79, Quentin Rowe speaking of CyberCom)

"The elaborate disguise came off piece by piece. In another moment, next to Jason sat a blond-haired man in his early thirties with a long aquiline nose and fair skin. The eyes, though, remained the same, blue and chilling." (Chapter 8, p. 94)

"Where the plane had penetrated the ground, nose first, there now existed a crater that later excavation...