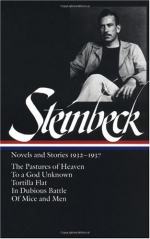 John Steinbeck
This Study Guide consists of approximately 44 pages of chapter summaries, quotes, character analysis, themes, and more - everything you need to sharpen your knowledge of Tortilla Flat.

This detailed literature summary also contains Topics for Discussion and a Free Quiz on Tortilla Flat by John Steinbeck.

Danny returns from the army to learn he has inherited two houses in Tortilla Flat. After being arrested for drunk and disorderly and escaping jail, Danny talks an old friend, Pilon, into renting one house, thereby setting them up for conflict. To cover rent, Pilon sublets to friends Pablo Sanchez and Jesus Maria Corcoran. A candle that Pablo has dedicated to St. Francis but uses for profane purposes sets fire to the house. Pilon, Pablo, and Jesus Maria escape, sleep in the forest and raid a picnic to obtain a peace offering for Danny, who relents and accepts them as guests.

Pilon talks the Pirate out of living in a chicken coop with his five dogs and into joining the household, the better to gain access to the Pirate's horde of quarters. They learn his woodcutting income is dedicated to St. Francis for miraculously curing a dog. The Pirate's begging becomes the mainstay of the household's food supply. Big Joe Portagee comes home from the army and, after a term in jail for drunk and disorderly, meets Pilon and joins the household. They spend St. Andrew's Eve searching for treasure, but only dig up a useless U.S. Geodetic Survey marker. Pilon and Joe get drunk on the Seaside beach, and Pilon trades Joe's pants for wine while Joe sleeps. Pilon later reclaims the pants and Danny's hocked blanket from Mrs. Torrelli.

Danny falls for "Sweets" Ramirez and gives her a vacuum cleaner, although her house has no electricity. Needing to break them up, the paisanos steal the vacuum and trade it to Torrelli, who grows furious when he sees it has no motor. Jesus Maria befriends a Mexican corporal, who tells the paisanos his tragic story. Ever-sleepy Big Joe is pursued by Tia Ignacia and ends up making love with her in the road. The paisanos discover the Pirate's moneybag missing and turn savagely vigilante against Big Joe. The surrendered bag holds enough quarters for the Pirate to redeem his vow to St. Francis. Decked out in the paisanos' best clothing, the Pirate attends mass, hears his donation praised, and preaches to his dogs all the priest has said about Francis. The paisanos go on a robbery binge to provide for Teresina Cortez and her children after the bean crop is destroyed and contemplate the funny-but-sad cases—Cornelia Ruiz's pig, Tall Bob Smoke, and the Ravannos.

Danny grows depressed, disappears into the forest, runs amok and sells his house to Torrelli, who foolishly shows off the bill of sale, enabling the paisanos to grab and burn it. When Danny returns, the paisanos earn enough money to throw him the best party ever, with all of Tortilla Flat helping and turning out. Danny makes love to the women, challenges the men to fight, races off, and dies in a fall down a dry gulch. His military funeral is a major social event, but the paisanos cannot attend because they lack appropriate clothing. They watch from afar, raid Torrelli's for wine to celebrate Danny's memory, and allow the house to burn down as a fitting tribute. The talisman that binds them is broken, and they go their separate ways.

More summaries and resources for teaching or studying Tortilla Flat.