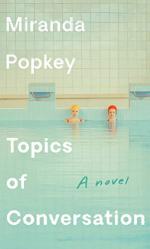 Popkey, Miranda
This Study Guide consists of approximately 58 pages of chapter summaries, quotes, character analysis, themes, and more - everything you need to sharpen your knowledge of Topics of Conversation.

This detailed literature summary also contains Quotes and a Free Quiz on Topics of Conversation by Popkey, Miranda .

The following version of this book was used to create this study guide: Popkey, Miranda. Topics of Conversation. Alfred A. Knopf, 2020.

Topics of Conversation takes place in modern times in the United States, starting in 2000 and ending in 2017. The novel is narrated by an unnamed woman, who struggles to know herself and her desires in the contexts of desire, feminism, art, and family. It is at once her journey of self-destruction and self-knowledge.

Section 1 of the novel focuses on the narrator as a young woman, studying in graduate school and in awe of the older women she meets. She has a vexed relationship with her inner desires. On the one hand, her peers, both graduate and undergraduate, are intellectual feminists, all of whom hold the conventions of mainstream feminism to be inviolable tenants of behavior. The narrator, however, is influenced by the wisdom and poise of Artemisia, the mother of her best friend from undergraduate, who cites her experience of rape as a source of pleasure, self-knowledge, and fulfillment. Struggling with her desire for the same thing and the condemnation of it from her peers, the narrator is a torn woman.

Section 2 of the novel centers on the narrator’s marriage and divorce to John, a kind man she met in graduate school. He was everything a liberated woman should want; healthy, supportive, kind, and intellectual. But her hidden desires plague her and she spirals down a self-destructive path, moving back to her parents’ house at the end of the section.

Section 3 shows the narrator finding herself after hitting rock bottom. She is a barely-functioning alcoholic, financially dependent on her parents, and filled with hate toward the people who love her most. However, at this point of rock bottom, Popkey’s narrator is able to indulge her deepest, darkest fantasies and discover their true nature. This section is necessary for her journey to authenticity.

Section 4 shows the narrator developing in strong but quiet ways. She develops a highly nuanced understanding of all the ways in which feminism has both failed her and proved itself necessary. She sets precedents for women around her to be intimate and open in their conversations, leading the way in the art of narrative and interpretation such that other women can find meaning in their own lives. Although she is a single mother and still an alcoholic, Popkey’s narrator has clearly grown since the beginning of the novel, and the self-knowledge she obtains is what sets her free in the final section of the novel.

Section 5 gives the narrator a modest but happy ending; she becomes financially independent, checks herself into rehab, becomes a loving mother, and can regard her own mother as an equal. Rather than indulging in self-destructive fantasies, she seeks healthy alternatives, at once refusing to compromise her desires and refusing to destroy her life. All the conversations she has had with herself and other women have come to the fruition she always craved: the embodiment of true self, convention and falseness thrown to the side.

More summaries and resources for teaching or studying Topics of Conversation.