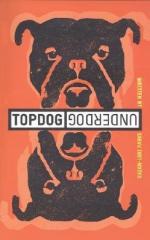 The play is imbued with a strong sense of history, though it is of a more personal nature than the type of history associated with textbooks. Throughout Topdog/Underdog, the brothers reveal parts of their past that have shaped their present circumstances. For example, Lonny's death influenced Lincoln's decision to stop dealing three-card monte. When Booth shows Lincoln the ring he boosted, he reveals a past relationship with Grace that has been nothing short of disappointing. Similarly, during an outburst of anger, Booth reveals the reasons why he slept with Lincoln's wife Cookie. Moreover, the one item that the brothers have salvaged from their days as a family is a "raggedy" photo album. It contains a link to a past that, though turbulent, still held hopes and dreams for the future.

Identity is an important theme within the play. Although Lincoln may share the name of The...