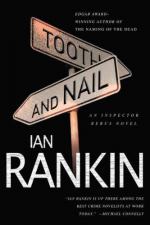 Ian Rankin
This Study Guide consists of approximately 33 pages of chapter summaries, quotes, character analysis, themes, and more - everything you need to sharpen your knowledge of Tooth & Nail.

This detailed literature summary also contains Topics for Discussion and a Free Quiz on Tooth & Nail: An Inspector Rebus Novel by Ian Rankin.

Tooth and Nail is the third novel by Ian Rankin featuring Inspector John Rebus. In this novel, Rebus is sent to London to help detectives hunt a serial killer dubbed the Wolfman by the press. Rebus feels out of place and like a fraud as the detectives and reporters call him a serial killer expert. Rebus has only hunted one serial killer and that case was personal. Rebus investigates the Wolfman in his own fashion, drawing help from a psychologist who claims she can profile the killer based on his victims, while at the same time dealing with a family crisis involving his sixteen year old daughter. Tooth and Nail is an old fashioned detective story from an award winning author that will keep readers spellbound until the final sentence.

Rebus arrives in London just as news of a new victim of the Wolfman serial killer begins broadcasting over the airwaves. Rebus goes directly to the scene of the crime and is shocked to see the brutality first hand of a case he has only read about. Rebus attends the autopsy and spends some time with the lead detective, uncomfortably aware that this detective seems to think he is some sort of expert based on one case Rebus worked several years before. Rebus is not an expert, that case was personal. However, Rebus has committed to helping the London detective, so he decides to do his best.

The next day, George Flight, the lead detective, takes Rebus on a tour of the crime scenes. Rebus asks questions and learns that the husband of the first victim, Tommy Watkiss, was initially a suspect because of his past sexual assault convictions. Rebus decides he would like to speak to the husband as well as the dental pathologist working the case. Flight promises to take him the next day. That night, Rebus goes to visit his ex-wife and daughter who moved to London after the divorce. The meeting is awkward and full of tension, especially when his daughter Sammy's boyfriend arrives. Rebus dislikes Kenny Watkiss on sight.

The following day, Flight takes Rebus to the Old Bailey, the courthouse, where Tommy Watkiss is on trial for rape. When the trial ends in a mistrial, someone calls out from the balcony. Rebus looks and sees that the spectator is Kenny Watkiss, his daughter's boyfriend. A moment later, Rebus is introduced to Malcolm Chambers, the barrister trying the case. Chambers is angry that the cop who arrested Watkiss introduced a bias into his testimony and chews Flight out over it.

Flight takes Rebus to speak to Anthony Morrison next, the dental pathologist. Morrison tells Rebus and Flight that the person making the bite marks on the victims has an oddly shaped jaw, showing them a re-creation he made based on the bite marks. Morrison also suggests that the suspect is using artificial teeth, that he might actually be wearing dentures.

That night, Rebus goes to dinner with Lisa Frazer, a psychologist who came to see him at his office and convinced him she could come up with a profile of the killer based on his victims. Frazer gives Rebus the beginning of her report over dinner, introducing some information Rebus had not considered before, such as the possibility that the killer is female and the idea that the killer knows police procedure and might be a cop. Afterward, Rebus walks Frazer home and she invites him upstairs, beginning a romantic affair.

The next day, Rebus is called to Glasgow to give testimony in a case he worked. While there, Rebus walks through a market and finds a stand selling mismatched dentures. Rebus thinks nothing of this at the time, but when he returns to London and someone puts a pair of chattering teeth on his desk, Rebus begins to wonder if the killer might not have bought a pair of mismatched dentures at a similar market to use on his victims. Before this, another murder is discovered. Rebus arrives at the crime scene and discovers Lisa there as well. The victim turns out to be a copycat done by a burglar who was surprised in the act by the home owner. However, Rebus tells the press that the victim is one of the Wolfman's victims and that the Wolfman has been caught.

Rebus is chastised by both Flight and the press liaison officer for speaking to the press without permission, but Rebus promises the lie will flush the killer out of hiding. Instead, the press coverage and the pictures of Lisa with Rebus prompt the killer to reach out to Lisa. The killer sends Lisa a letter that warns she will be the next victim if she does not retract the lies told to the police. Lisa is placed into police custody, but insists on going to the Old Bailey to conduct some interviews she had scheduled weeks before. While this is taking place, Rebus receives a call from his daughter informing her that her boyfriend has disappeared. Rebus promises to look into the matter and asks Flight for his help.

Rebus begins to think that the Wolfman is a cop and that Lisa could be in danger. Rebus goes to the university where Lisa works and learns that Lisa has lied to him, that she is not a psychologist, but a research student. Rebus also learns that Lisa is at the Old Bailey instead of the safe house Flight was supposed to send her to. On the way to the Old Bailey, Rebus realizes that the note sent to Lisa uses some slang common among Americans. It is also slang that Rebus heard Malcolm Chambers, schooled in America, use. It dawns on Rebus that Malcolm Chambers could be the Wolfman and he is supposed to meet with Lisa at that very moment.

Rebus rushes to the Old Bailey only to discover that Chambers has already disappeared with Lisa. Rebus steals a car and chases after them, managing to get a confession out of Chambers over the car phone. When Flight gets up a road block, Chambers leaves his car and runs into the National Gallery. Rebus follows and a knife fight ensues. Chambers is killed, leaving the police with no motive for the killings. Rebus prepares to return to Scotland, but before he does, he goes to see Kenny Watkiss. Kenny has been hiding from his uncle because he has been skimming money from the stolen goods racket Watkiss has been running. Kenny tells Rebus that not only is his uncle involved in the scam, but a cop is as well. Rebus gives Kenny money to get out of town under the condition that Kenny not see Sammy ever again.