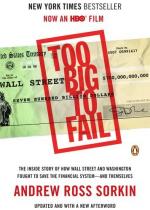 Too Big to Fail: The Inside Story of How Wall Street and Washington Fought to Save the FinancialSystem--and Themselves Summary & Study Guide

Andrew Ross Sorkin
This Study Guide consists of approximately 29 pages of chapter summaries, quotes, character analysis, themes, and more - everything you need to sharpen your knowledge of Too Big to Fail.

Too Big to Fail: The Inside Story of How Wall Street and Washington Fought to Save the FinancialSystem--and Themselves Summary & Study Guide Description

Too Big to Fail: The Inside Story of How Wall Street and Washington Fought to Save the FinancialSystem--and Themselves Summary & Study Guide includes comprehensive information and analysis to help you understand the book. This study guide contains the following sections:

This detailed literature summary also contains Topics for Discussion and a Free Quiz on Too Big to Fail: The Inside Story of How Wall Street and Washington Fought to Save the FinancialSystem--and Themselves by Andrew Ross Sorkin.

Too Big to Fail is a non-fiction account of the financial crisis that hit the United States in 2008 which resulted in the implementation by the federal government of the Troubled Asset Relief Program, or TARP, which purchased bad assets and invested public money directly in financial institutions in an effort to stabilize the system.

In the span of a few months, the traditional structure of the American financial system was fundamentally changed, Sorkin claims, as many of the top financial institutions struggled to stay afloat while the assets upon which they had built a large business lost tremendous value. Lehman Brothers, one of the top brokerage firms, went into bankruptcy. Bear Stearns, another top brokerage, was saved when the JP Morgan bank purchased it with guarantees by the government. AIG, the world's largest insurance company, was also saved only with government assistance, and the home lending companies Fannie Mae and Freddie Mac were taken over by the government. The two top brokerages, Goldman Sachs and Morgan Stanley changed their structure to become bank holding companies in order to borrow money from the Federal Reserve. Finally, the TARP program invested public money directly in financial institutions for support.

Sorkin presents a "real-time" account of the behind-the-scenes deals and meetings among the top players in the financial world. He follows Dick Fuld, the CEO of Lehman Brothers as he desperately tries to find investors to inject cash into his failing firm, and presents an inside account of the meeting of the other top firms which came together in an attempt to save Lehman. He recounts the final days at Lehman as the plan to save the firm is ultimately shot down by British regulators who refused to allow the participation of the British bank Barclays.

Sorkin also looks at the political pressure that Treasury Secretary Henry Paulson faced to avoid the appearance of "bailing out" his former Wall Street colleagues and how Paulson came to change his mind and develop the TARP plan along with Tim Geithner and Ben Bernanke at the Federal Reserve. The key central role that the Federal Reserve and Treasury Department played in brokering deals between firms is also revealed. While the Treasury department and Federal Reserve did not have legal authority to make many of the changes they wanted, they had the regulatory power to make things difficult for firms that did not cooperate.

Ultimately, Sorkin concludes that the lessons learned from the crisis of 2008 have largely gone unheeded. Financial executives are still rewarded for taking aggressive risks and no significant new regulations have come about to avoid a similar crisis in the future.

More summaries and resources for teaching or studying Too Big to Fail: The Inside Story of How Wall Street and Washington Fought to Save the FinancialSystem--and Themselves.

Too Big to Fail: The Inside Story of How Wall Street and Washington Fought to Save the FinancialSystem--and Themselves from BookRags. (c)2022 BookRags, Inc. All rights reserved.