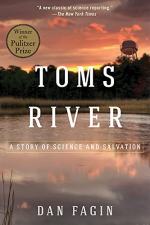 This study guide is based on the following version of this book: Fagin, Dan. Toms River: A Story of Science and Salvation. Washington: Island Press, 2015.

This is a work of nonfiction that chronicles the historical aspects of environmental science, and how pollution leads to illness. While the grand story arc encompasses hundreds of years of history, the parts relating to Toms River focus on approximately the last 60 years.

Toms River started out as a large - but sparsely populated - agrarian town near the Atlantic Ocean, Barnegat Bay, and the Toms River, which gave the town its name. A Swiss industrial giant with more than 100 years of experience manufacturing dyes and other chemicals decided to build a factory there. The company had been chased out of Cincinnati for being one of many companies that polluted the Ohio River. The company, Ciba-Geigy, bought acres of land in the pine forest. No one knew what was going on back in that factory unless they worked there. The workers were threatened if they complained too much about unhealthy work conditions.

The unhealthy conditions spread further than the factory, though. The dye manufacturer created a lot of waste, and something had to be done with it all. The most economic way to dispose of it was to dump it. A pipeline led to the Toms River. When people complained about that, the company got permission to build a pipeline to the ocean. When people complained about the smoke coming from the smokestack, the company started utilizing it more at night so no one would see the smoke. There were also hundreds of drums of liquid chemicals buried and leaking all over the property. In some cases, the liquid waste was simply poured into the ground.

In another area of town, there was a closed chicken farm owned by an immigrant couple. It would become known as the Reich Farm. They had made a deal with a man named Nick Fernicola that he could store some drums on the back, unused acres of the farm. He had a contract with Union Carbide, a factory in northern New Jersey, to dispose of its drums of waste. Instead of paying fees to dispose of the waste in a legal way, Fernicola just dumped it all on the Reich property. The drums leaked, and the chemicals seeped into the ground.

Contamination from both of these sites would go on to poison wells in the area. Most of them were private wells. Entire neighborhoods were drinking the chemicals. They were urged to switch over to the township's water pipes, so they did. However, the township's wells were also contaminated by the same waste. The Toms River Water Company did not release that information. The local politicians did nothing. They had too many connections to the water company and to the Ciba-Geigy management. They did not rock the boat.

Eventually, the secrecy that surrounded the factory and its pollution came to light. In 1984, the pipeline Ciba-Geigy used to transfer waste to the ocean leaked right in the middle of a residential area. Most residents did not know that Ciba-Geigy had an ocean pipeline. This angered a lot of people. That anger caused the local politicians to have to act. Many towns depended on the beaches for their tourism, and word of a factory dumping into the ocean would hurt the economy.

It was around this time that some local residents started organizing to demand better environmental protections. Chief among those was Linda Gillick. Doctors believed that her son, Michael, developed cancer while still in the womb. He had the disease his entire life. She organized a group of families of children with cancer called Ocean of Love, named after Ocean County, where Toms River is located. She had met a lot of other patients at cancer hospitals, and a very high number of them came from Toms River. A former teacher, she was able to help put a human face on what would be called by many a “cancer cluster.”

Ciba-Geigy was on the front line, but people did not seem to blame the Reich Farm for the contamination. Additionally, the author states that there were any number of other smaller polluters in the area, such as gas stations. However, Ciba-Geigy was the main opponent for most of the people.

A local news reporter, Don Bennett, wrote almost daily about Ciba-Geigy and the chemicals that were being used there. Eventually, his stories graduated up to state newspapers that were read by state politicians. The outcry was bigger than anything Ciba-Geigy or their friends in local politics could contain. Finally, an unlikely chain of connections from a cancer nurse in Philadelphia to the state government caused the state to finally investigate the issues.

Throughout the book, the author explains key moments in epidemiology, the study of illnesses and their causes. Specific physicians and other great thinkers are highlighted. Epidemiology has come a long way, but it falters when it comes to finding a direct cause for a particular illness. Some cases are very clear, such as when scrotal cancer was detected in high cases in chimney sweeps. But often, there was only a correlation, not a causation. There were elevated numbers of certain cancers among people who lived a certain way, but it did not necessarily prove anything. Although it takes a while for the author to get there, he shows the strengths and weaknesses of this scientific field to show why these cancer studies would ultimately come up empty-handed.

The first physician Fagin highlights is Paracelsus, a Swiss physician in the 1500s. While all of his peers believed that illnesses were caused by humors - an excess of blood that needed to be leeched, for example – Paracelsus was the first to study the environmental factors of a patient. How did they live? It was this question that laid the basis for research-based studies on illness.

A series of other physicians and scientists followed. Each one added something to the field, or took something away. The physicians learned that an outside force, like pollution, could cause disease. However, going even further, they learned that multiple things could cause disease. A researcher could no longer draw a line from water quality to cancer. Now, they had to contend with a number of factors, including genetic predisposition, diet, and smoking. Therefore, while environmentalists were able to claim that pollution caused disease, the polluters were able to show that the cancer could have come from a number of sources. In court, when juries had to decide something without any shadow of doubt, it was easier for corporations with deep pockets to find experts to shoot holes in any theory that environmentalists could have. A correlation between pollution and illness was not enough. There was no causation.

The book ends with the conclusion of a legal settlement between the Ocean of Love families and Ciba-Geigy, Toms River Water, and Union Carbide. The families received an undisclosed financial package in exchange for allowing the companies to say that they did nothing wrong. The author had spent hundreds of pages explaining things the companies had done wrong, but ultimately it was not proven that those wrongdoings were the cause of cancer in Toms River.