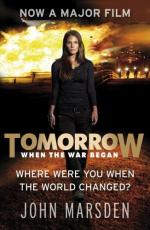 John Marsden (writer)
This Study Guide consists of approximately 32 pages of chapter summaries, quotes, character analysis, themes, and more - everything you need to sharpen your knowledge of Tomorrow, When the War Began.

Tomorrow, When the War Began Summary & Study Guide includes comprehensive information and analysis to help you understand the book. This study guide contains the following sections:

This detailed literature summary also contains Topics for Discussion and a Free Quiz on Tomorrow, When the War Began by John Marsden (writer).

Ellie and Corrie are best friends in their final year of school when they decide to skip Commemoration Day activities in favor of a camping trip. They issue invitations to a group of friends and make their plans. Among those who are going along are Ellie's neighbor and childhood friend Homer, a classmate Fiona, Corrie's boyfriend Kevin, a friend Robyn, and a classmate Lee. Ellie says that she finds Lee interesting though he isn't an intimate part of their group prior to the trip. They head to an area known as Taylor's Stitch and prepare to drop down into a rocky valley known as Hell. There's a rumor that a hermit lived there for many years after killing his wife and infant son. Ellie says that if he could get down into Hell, they can surely find a way. They do discover a way down and once there, find that there's a trail that makes the trek much easier though it is completely concealed from the road. For several days, the group takes it easy. They have water and have packed in plenty of food, so they simply enjoy their time.

One night planes fly over and the next day they head back. At Ellie's house - the first they encounter - there's no one at home and several of the dogs that are tied up outside are dead. They find similar scenes at other houses along the way and eventually realize that something horrible has happened. That makes them more cautious and they soon realize that soldiers have invaded, taking everyone who was attending Commemoration Day events prisoner. There has been some killing and the various members of the group find themselves in dangerous situations as they try to assess the situation and figure out their next move. They rule out a rescue of their families as too risky and gather up everything they can to help wait out the time until help arrives. They then return to "Hell," knowing that if they disguise their approach up Tailor's Stitch they can likely avoid detection by the military.

Over the coming days, they secretly take more supplies into their camp site. They hide supplies in various places around the mountain in case they get cut off. In a daring ploy, Lee, Homer, Ellie and Fiona blow up a bridge - an act they believe will seriously hamper the invaders' supply lines. When Corrie is shot in the back, Kevin takes her to the hospital, hoping that the enemy will take her in and save her life as the remainder of the group settles in, plants vegetables and does whatever they can to hamper the progress of their enemy. Meanwhile, several of the young people of the group pair off - Fiona with Homer and Ellie with Lee. As they look for ways to survive, they deal with the emotional upheaval, each trying to make sense of the situation and their roles in it.

More summaries and resources for teaching or studying Tomorrow, When the War Began.

Tomorrow, When the War Began from BookRags. (c)2022 BookRags, Inc. All rights reserved.