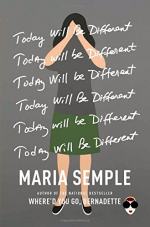 Maria Semple
This Study Guide consists of approximately 48 pages of chapter summaries, quotes, character analysis, themes, and more - everything you need to sharpen your knowledge of Today Will Be Different.

Today Will Be Different Summary & Study Guide includes comprehensive information and analysis to help you understand the book. This study guide contains the following sections:

This detailed literature summary also contains Quotes and a Free Quiz on Today Will Be Different by Maria Semple.

The following version of this book was used to create this study guide: Semple, Maria. Today Will Be Different. London: Weidenfeld & Nicolson, 2016.

Eleanor Flood decides one day that she will be a better person, more present, and kind to others. Her present has thus far been a combination of social faux pas and anxiety. She and her husband Joe have lived in Seattle, where Joe is a celebrity hand surgeon for the Seahawks, for nearly ten years with their son Timby and dog Yo-Yo. Eleanor is meant to be writing a memoir, but has found that her mind has slowed after having a child and she employs a poetry teacher to help her memorize and discuss poetry in emulation of her late mother, a stage actress. Besides her poetry teacher named Alonzo, she likes few people in Seattle and expects to move back to New York City after their ten years on the West Coast is up.

Timby fakes an illness at school and Eleanor is called to pick him up. While doing so, other moms at the expensive private Galer Street School try to draw her into a fundraiser because of her minor fame as the lead animator for the popular, but now defunct adult cartoon TV show called Looper Wash. Eleanor and Timby visit Joe’s office but find that Joe is not there. She realizes that Joe told the rest of the office that the family was on a vacation, without telling her. She worries that he is having an affair.

Eleanor takes Timby to what she thinks is a lunch date with her annoying friend Sydney Madsen, and is surprised to find instead former Looper Wash intern Spencer. He gifts her with the program from a graphic novel competition, for which her short comic, The Flood Girls, was nominated. The comic consists of 12 scenes in the childhood of Eleanor and her sister Ivy. As it turns out, the memoir that she is meant to be writing is based on this short work, which explores the Floods’ family life: their mother’s death, their move to Colorado, and their alcoholic father’s work as a bookie. Seeing the program triggers a flashback to the beginning of Eleanor’s rift with Ivy, whose existence Eleanor has kept secret from her son.

Ivy meets her husband Barnaby “Bucky” Fanning in 2003 at a Looper Wash party held by Bucky’s roommate from Vanderbilt. She quickly falls in love with the heir from New Orleans and moves to Louisiana. At first, Eleanor finds Bucky amusing, but quickly violates his strict sense of social norms, publicly embarrassing him at his engagement party and several times thereafter. Eleanor had drawn The Flood Girls as a wedding present to Ivy, but during a fight, Ivy says she and Bucky were offended by the work and its depiction of their imperfect childhood. Eleanor refuses to see Ivy in person for three years, though the two talk over the phone.

The next time the sisters see each other is at their father’s funeral in New York, where Ivy interrupts a eulogy to blame her dysfunctional childhood and now dysfunctional marriage on their alcoholic father. Bucky has become hyper-controlling and blames Eleanor for somehow tricking him into marrying Ivy. Ivy begins discussing divorce and plans to move to Seattle, with Eleanor's encouragement. Ultimately, Ivy decides to return to the marriage and breaks off contact with her sister. She has a publishing deal to expand The Flood Girls into a memoir, but she delays working on it.

Back in the present day, Eleanor continues to have mixed feelings about the split and has buried The Flood Girls under piles of junk. As it turns out, the editor of her supposed memoir left her job some time ago, but in any case, the full memoir is eight years late.

After meeting with Spencer and encountering her poetry teacher again, Eleanor follows Joe’s GPS to a generic suburban church where an AA meeting is taking place. The members point her to the Key Arena, where Joe’s choir is rehearsing for a papal visit to Seattle. Joe is not an alcoholic, but turned to religion after having a violent argument with the Seahawks coach about a player’s recovery. An argument erupts as Eleanor berates Joe for returning to Christianity after years of identifying as an atheist ex-Catholic.

Mixed in with her anger at Joe’s lying is fear that she has not given him enough emotional support, but he insists that it is a personal journey and not a reflection on her. His revelation that he has applied to theology schools angers her even more. She tries to storm the stage once Joe’s choir starts singing, but is attacked by a security dog. In Joe’s examination room, she reconciles with her husband and says she is open to moving for his studies. She finally uncovers The Flood Girls from her workspace and tells Timby about Ivy.

More summaries and resources for teaching or studying Today Will Be Different.

Today Will Be Different from BookRags. (c)2022 BookRags, Inc. All rights reserved.