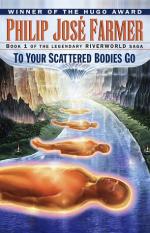 Philip José Farmer
This Study Guide consists of approximately 29 pages of chapter summaries, quotes, character analysis, themes, and more - everything you need to sharpen your knowledge of To Your Scattered Bodies Go; a Science Fiction Novel.

To Your Scattered Bodies Go; a Science Fiction Novel Summary & Study Guide includes comprehensive information and analysis to help you understand the book. This study guide contains the following sections:

This detailed literature summary also contains Topics for Discussion on To Your Scattered Bodies Go; a Science Fiction Novel by Philip José Farmer.

To Your Scattered Bodies Go; a Science Fiction Novel is story of a man's search for meaning and answers beyond his death. The story also explores the grim aspects of human nature. Burton is an explorer who dies in the late nineteenth century, only to awaken suddenly and find that his body is being reconstructed. After losing consciousness again, he awakens in a new world, alongside nearly every former inhabitant of earth. Immediately he comes into contact with several fascinating people, including a twentieth century writer named Frigate, an alien responsible for the death of most of humankind named Monat, and a prehistoric human named Kazz. Burton immediately assumes the role of leadership as the people in areas around them rapidly begin to fight with one another. Amongst his group is a woman named Alice, for whom Burton possesses strong feelings; but she rejects him initially as she searches for her husband. Time passes and Burton both learns more about the surrounding area and develops new tools and methods to survive in the area. His curiosity regarding the nature of the resurrection gets the better of him, and he soon makes plans with his group to set forth towards the mouth of the river, where he believes he will find all of the answers he seeks. He and his party travel a very long time and distance up the river, learning a great deal about ancient peoples and the world they are now in. Yet Burton is looking for clues as to who may be in charge of the planet, and why they have brought everyone back to life. One day, they come across a land that is controlled by an ancient Roman king named Tullius, and a Nazi leader named Goring. The two have plans for conquest, and ask Burton and his followers to join them. When Burton refuses, they are enslaved briefly, but rescued by Kazz one night as the land is attacked by several neighboring peoples. A slave revolt ensues and Burton assumes leadership of the people, when Kazz reveals something he has been unable to express before. Kazz tells Burton that everyone has a different symbol on his or her head on this planet, except for three people he has seen, and one of them is a slave to Goring. Suspecting that this man is one of the people responsible for the resurrection, they confront him, but he dies. Afterward, Burton fears discovery by the men, and works his way farther up the river until he is nearly caught. He drowns himself in order to escape capture, and awakens near Goring. The two despise each other, but as time progresses and they both die and become resurrected near each other, they realize they are together for some deeper purpose. Burton continues his struggle towards the mouth of the river despite the fact that he is clearly being hunted, until finally he is caught by the ones he has come to think of as the ethicals. They warn him that he cannot be resurrected indefinitely, but instead must from now on be careful to survive as long as he can. He awakens this time near Frigate, who is thrilled to see him, and resolves to continue his journey towards the mouth of the river.

More summaries and resources for teaching or studying To Your Scattered Bodies Go; a Science Fiction Novel.