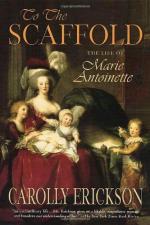 To the Scaffold: The Life of Marie Antoinette Summary & Study Guide

To the Scaffold: The Life of Marie Antoinette Summary & Study Guide Description

To the Scaffold: The Life of Marie Antoinette Summary & Study Guide includes comprehensive information and analysis to help you understand the book. This study guide contains the following sections:

This detailed literature summary also contains Topics for Discussion and a Free Quiz on To the Scaffold: The Life of Marie Antoinette by Carolly Erickson.

To the Scaffold is Carolly Erickson's biography of Marie Antoinette, the last Queen of France who was executed at the end of the eighteenth century. Born the daughter of Queen Maria Theresa of Austria, the pretty Antoinette was promised at a young age to the young Louis, the Dauphin of France, who would later ascend to the throne as King Louis XVI.

Erickson depicts Antoinette as a charming woman who was ill-prepared for the plotting and intrigue she encountered among the courtiers at the palace of Versailles, the main seat of the French court. Her lack of pretense and kindly disposition won her many friends, but also enemies, including Madame du Barry, the powerful mistress of her husband's grandfather, King Louis XV. Erickson documents Antoinette's lavish spending on clothing, furnishings, decorations and entertainments for the hundreds of courtiers who inhabited Versailles and followed the French court.

As Antoinette and the rest of the court was spending itself into unfathomable debt at Versailles, conditions among the French people deteriorated, particularly in nearby Paris, where riots over the high price of bread became more and more common. King Louis XVI, Erickson writes, was not the vacant and ignorant aristocrat that he has sometimes been portrayed as being. Rather, he had too much faith in the love of the French people for their king and more interest in hunting and his own hobbies than in addressing matters of state. On the advice of her experienced mother, Antoinette pressed her husband into action whenever possible, which started rumors that it was she who was actually in charge of the country.

Popular dissatisfaction with the monarchy grew, and Antoinette became a prime target, Erickson explains. Popular songs and newspaper articles exaggerated her lavish spending and political influence over the king. She was accused of sexual indecency and negligent disregard for the well-being of the people. Whenever she appeared in public, she was assailed by insults from the public. As demonstrations grew more violent, the royal family was forced to move to their rundown palace in Paris, where they lived under house arrest. Antoinette pressed the king to try to escape France along with their children, but they were discovered and returned to Paris.

Meanwhile, political revolution was underway in France as the national parlement worked on creating a constitution for a constitutional monarchy based on England's government. The helpless king had no choice but to agree and the new government limped along for a short while as the French economy continued to deteriorate. Sentiment against the monarchy continued to rise and the royal family and many of the nobility were imprisoned. Louis was finally tried for treason, found guilty and publicly beheaded. Soon afterward, Antoinette was separated from her children and also sentenced to death. She faced her fate with dignity, Erickson writes.