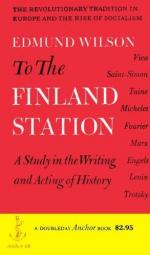 To the Finland Station; a Study in the Writing and Acting of History Summary & Study Guide

Edmund Wilson
This Study Guide consists of approximately 29 pages of chapter summaries, quotes, character analysis, themes, and more - everything you need to sharpen your knowledge of To the Finland Station; a Study in the Writing and Acting of History.

To the Finland Station; a Study in the Writing and Acting of History Summary & Study Guide Description

To the Finland Station; a Study in the Writing and Acting of History Summary & Study Guide includes comprehensive information and analysis to help you understand the book. This study guide contains the following sections:

This detailed literature summary also contains Topics for Discussion and a Free Quiz on To the Finland Station; a Study in the Writing and Acting of History by Edmund Wilson.

TO THE FINLAND STATION, by Edmund Wilson, traces the development of revolutionary thought and politics from the period of the French Revolution to the Russian Revolution. Wilson looks at the different people and their theories beginning with Jules Michelet who was fascinated with the processes proposed by Vico, through Marx, Lenin and Trotsky. The book traces the development of revolutionary thought as each theorist picked through the extant theories and built upon the theories of their predecessors. The time span this book covers is about one-hundred-fifty years. Anderson provides biographical information on the different characters as well as discussing their theories.

Until the time of Marx and Engels, different theories dealt with nations on an individual basis. So did the literature and rhetoric of revolution. Marx and Engels combined philosophy, history and economics to give their works an international scope. They proposed principles that could apply anywhere, regardless of national boundaries.

Throughout the book, the reader watches how theories developed and how the writers anguished to make their theory as logically consistent as possible. Many writers spent time in prison and some of the Russian theorists are exiled to Siberia for their activities and beliefs. These revolutionary writers moved around Europe going to a different country when they had trouble with the police.

The main characters of the book were revolutionaries of various kinds. Tthey resented the oppressiveness of government and the harsh living conditions of the masses. They dreamed of overthrowing the existing regimes and replacing them with governments that would result in better living conditions for the people. Once splintered groups found common ground in the writings of Marx, Engels and Lenin, the revolutionary movement became more united. Marx and Engels changed the way people viewed history and the approach they took to different situations.

The book is not just a book about the Russian Revolution. It is a book about the process that led to the Russian Revolution. The works of the revolutionaries like Marx and Engels changed the way people looked t things and the way they did things. In this respect, TO THE FINLAND STATION is a book about history and the importance of history. Society advances by studying the past and applying what is learned to the present and the future. Learning from the mistakes of the past contributes to the betterment of the present and the future. Wilson's book shows the interactions in history that led to social change and how they were used by thinkers like Hegel, Marx, Lenin and Trotsky.

Wilson's book deals with the theories and the flaws in them. The reader does not have to possess any prior knowledge of these areas in order to follow and understand Wilson's points, although such knowledge enhances the experience of the book. The book is well worth the time spent reading it.

More summaries and resources for teaching or studying To the Finland Station; a Study in the Writing and Acting of History.

To the Finland Station; a Study in the Writing and Acting of History from BookRags. (c)2022 BookRags, Inc. All rights reserved.