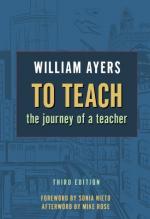 To Teach: The Journey of a Teacher Summary & Study Guide

Bill Ayers
This Study Guide consists of approximately 22 pages of chapter summaries, quotes, character analysis, themes, and more - everything you need to sharpen your knowledge of To Teach.

To Teach: The Journey of a Teacher Summary & Study Guide Description

To Teach: The Journey of a Teacher Summary & Study Guide includes comprehensive information and analysis to help you understand the book. This study guide contains the following sections:

This detailed literature summary also contains Topics for Discussion and a Free Quiz on To Teach: The Journey of a Teacher by Bill Ayers.

Many know William Ayers from the 2008 United States Presidential Election as the infamous Chicago political leader, leader of the radical anti-war 60s-era organization, the Weathermen, who was responsible for the beginning of President Barack Obama's political career.

During Ayers's tenure with the Weathermen, he and his wife, Bernadine Dohrn, along with others, were responsible for setting off a small bombs between 1970 and 1972 at the New York City Police Headquarters, the United States Capitol building and the Pentagon. The charges against Ayers and Dohrn were dropped only because the FBI was found to have used illegal methods of attaining information.

Ayers's once more became a controversial figure when his lack of repentance for his radical past led the American right to negatively associated him with Barack Obama, wrongly or rightly. As such, many will come to Ayers's book, To Teach: The Journey of a Teacher, with preconceptions about who Ayers is and what his views are.

It is best to set these views aside. Ayers's book is a popular work on education reform. In the book, Ayers makes no claims about terrorism of any kind, and he only mentions the Vietnam War once and in passing. His political ideology continues to be deeply affiliated with the New Left, but he emphasizes educational themes from the New Left with which many readers will be unfamiliar.

For instance, he argues that the public school system is too rigid, bureaucratic and hostile to creativity, that educational systems often structure learning in ways that preclude opportunities for personal expression, development and "surprise." His primary ideological influence in To Teach is to promote respect for the individuality and growth of each student, of refusing to treat students according to classifications and standardized tests, but as human beings.

The book is fairly short, with eight short chapters, and is very accessible. Ayers writes from personal experience and then draws his educational philosophy from these experiences. Each chapter encapsulates a single teaching idea and in the end Ayers ties them all together. Chapter 1, "Beginning: The Challenge of Teaching" discusses how teaching must involve the whole person of the teacher and not be seen as a mechanistic task. Chapter 2, "Seeing the Student," argues that teaching is an interactive practice that requires seeing the student as a whole and unique person.

In Chapter 3, "Creating an Environment for Learning," Ayers argues that a major part of teaching is the task of constructing a "laboratory" for learning that can accommodate the uniqueness of students. Chapter 4, "Building Bridges," argues that teachers must work hard to build bridges with students to educate them, that they must find ways of communicating to students according to students' interests. In Chapter 5, "Liberating the Curriculum," Ayers argues that curriculum is not a passive set of ideas to be taught, but an interactive set of social choices that a classroom must settle on together.

Chapter 6, "Keeping Track," criticizes standardized testing and recommends more individualized forms of keeping track of student progress. In Chapter 7, "The Mystery of Teaching," Ayers defends the view that teaching requires a complex mixture of skills that makes the whole practice of teaching a mysterious achievement. The last chapter, Chapter 8, "Beginning Again: The Current Challenge to Teach," Ayers encourages teachers to set aside their preconceptions and begin to build their own unique teaching philosophy.

More summaries and resources for teaching or studying To Teach: The Journey of a Teacher.

To Teach: The Journey of a Teacher from BookRags. (c)2022 BookRags, Inc. All rights reserved.