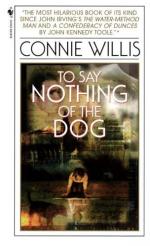 To Say Nothing of the Dog, or, How We Found the Bishop's Bird Stump at Last Summary & Study Guide

To Say Nothing of the Dog, or, How We Found the Bishop's Bird Stump at Last Summary & Study Guide Description

To Say Nothing of the Dog, or, How We Found the Bishop's Bird Stump at Last Summary & Study Guide includes comprehensive information and analysis to help you understand the book. This study guide contains the following sections:

This detailed literature summary also contains Topics for Discussion on To Say Nothing of the Dog, or, How We Found the Bishop's Bird Stump at Last by Connie Willis.

Ned Henry and Verity Kindle are time travelers, working for Oxford's history research department. The program has been commandeered by wealthy heiress Lady Schrapnell, who is employing historians to research Coventry cathedral, which was bombed by the Nazis in 1940, never rebuilt, and had its site turned into a mini-mall in 2018. She has begun a project to reconstruct the cathedral on Oxford grounds. Verity Brown, while on assignment in 1888 to investigate the life of Lady Scrapnell's ancestor Tossie Mering, rescues a cat from drowning, and set in motion of series of events that threatens to unravel the course of history. Ned Henry is sent back in time with the cat, to try to restore the timeline. At stake is the outcome of World War II and all of its subsequent affects on the future.

While investigating the disappearance of the bishop's bird stump from the Coventry cathedral on the night of the raid in 1940, Ned Henry is pulled from the field with symptoms of time lag. At the same time, Verity Brown arrives from 1888, bearing with her a cat named Princess Arjumand, which she rescued from drowning in the river. As the cat is the first thing historians have ever been able to bring forward in time, there is instant worry about the impact its disappearance has made on the time continuum. Verity returns to her posting, where she is trying to recover pages of Lady Schrapnell's ancestor Tossie's diary. Ned Henry is given the task of returning the cat.

Ned arrives in 1888 and quickly befriends a young man named Terence, who has fallen in love with Tossie Mering. The two rent a boat and row down the river Thames accompanied by Terence's bulldog Cyril, for a rendezvous Terence has arranged with Tossie. On the way, they rescue Terence's mentor, Professor Peddick from drowning. After a brief meeting with Tossie and Verity Brown, who is undercover as a cousin of the Merings, the three men row to the Mering's estate, Muching's End.

At Muching's End, they return Tossie's missing cat. Verity tells Ned that Tossie is suppose to marry a man whose name begins with a 'C,' but when Terence and Tossie announce their engagement, Verity worries that her rescue of the cat has upset the timeline. Tossie's diary, the parts of which that are not damaged, is being studied in the future. It reveals that Tossie is soon to have an experience that changes her life and leads her into the arms of her husband. The event is to take place in Coventry cathedral and somehow involve the bishop's bird stump.

Ned and Verity use a fake séance to maneuver the Merings into visiting the cathedral on the fated day, but nothing remarkable seems to happen, except that Tossie has a dispute with the family's butler Baine over the artistic merits of the bird stump.

The timeline seems to have been disrupted. Tossie will not marry Mr. 'C,' leave for America, and found the movie studio which begins Lady Scrapnell's family empire. Terence will not marry Maud Peddick and have a son who flies an important bombing mission during World War II. Also, it appears the disappearance of the bird stump from the cathedral on the night of the raid in 1940 has somehow compromised the Allied decryption program Ultra.

But, after a confrontation in the garden at Muching's End, Tossie elopes with the butler Baine, who turns out to be the mysterious Mr. 'C.' The timeline repairs itself, and it is left to Ned and Verity to put the pieces of the mystery together and recover the bird stump in time for the consecration of the new cathedral.

To Say Nothing of the Dog, or, How We Found the Bishop's Bird Stump at Last from BookRags. (c)2022 BookRags, Inc. All rights reserved.