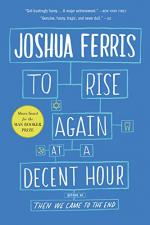 To Rise Again at a Decent Hour Summary & Study Guide

Joshua Ferris
This Study Guide consists of approximately 53 pages of chapter summaries, quotes, character analysis, themes, and more - everything you need to sharpen your knowledge of To Rise Again at a Decent Hour.

To Rise Again at a Decent Hour Summary & Study Guide includes comprehensive information and analysis to help you understand the book. This study guide contains the following sections:

This detailed literature summary also contains Quotes and a Free Quiz on To Rise Again at a Decent Hour by Joshua Ferris.

To Rise Again at a Decent Hour, by Joshua Ferris, tells the story of a fictional character named Paul O'Rourke. Paul has a successful dental practice in New York. He pushes himself to do the best he can with his business, but he feels that most people don't understand the importance of taking care of their teeth. He consciously tries to limit his dependence on technology and refers to cells phones as “me-machines.” He realizes that he is searching for something that can fill his life, but he doesn't know what that might be. He claims to be an atheist, but he acknowledges that his life would be better if he could simply believe in God and focus on some religion.

Paul's childhood was chaotic, mostly because his father was manic-depressive, suffering through bouts of highs and lows. Paul's father, Conrad, was a loyal Red Sox fan despite the fact that the team had not won a World Series in years. Paul remembers watching the games with his dad, including all of Conrad's superstitions. Conrad fell into a deep depression and committed suicide, shooting himself in the family's bathtub. For awhile, Paul was terrified that he might be the only person awake at night. That fear was loneliness, the result of his father's absence, and it continued to haunt Paul throughout his life though he did get a level of control as an adult.

Paul had a couple of serious girlfriends, but part of the draw was the idea of becoming part of their families. The first, Samantha, was from a large Catholic family, and Paul found himself drawn to her family despite the fact that he claimed not to believe in God. The second, Connie, was Jewish. Paul managed to be slightly more reserved with her family, though he desperately wanted to be accepted by them.

Paul's dental practice is thriving when he sees a new patient named Al Frushtick. Al says that he is a member of an ancient religious group, the Ulms, and that Paul is also a member of that group. Paul believes that Al is rambling because of the gas used during the dental procedure and dismisses the man's comments. Then a website for Paul's dental practice appears online. Paul hasn't approved the creation of the site but finds that it's nearly impossible to have it taken down. He begins to communicate with the person he believes is the site designer, a company named Seir Designs. Paul is actually talking to Grant Arthur, the modern-day leader of the Ulms.

The Ulms are a religious sect who believe that their one commandment from God was the instruction that they were to doubt God's existence. As Paul begins to learn about the Ulms, he questions the feasibility of that commandment but comes to realize that most religions have some level of conflict. Paul connects with another member, a millionaire named Pete Mercer. Pete says he has explored most religions and confirms that the Ulms are real. However, Pete learns new information about Grant Arthur and sours on this religion as well. Paul is shocked when he learns that Pete has closed down all his business endeavors and committed suicide.

Paul continues to learn about the Ulms while he struggles with his personal life. One day, a young patient announces that she's pregnant. She has a cavity, but she and Paul agree that she'll wait until after the baby is born to have the work done. Paul suddenly understands that this is what normal people might do and that he has the ability to find happiness within himself. With this new level of understanding, he tries to reconnect with Connie but she isn't willing.

Paul goes on with his life, admitting that his father is gone and that his devotion to the Red Sox has been fanatical because he hoped it might somehow bring his father back. He sets that devotion aside as he continues to work, looks more closely at the Ulms, and spends time focusing on his own life. One day, he sees a Cubs hat in the window of a shop and realizes that he might begin following that team, also underdogs with a lengthy losing streak behind them.

More summaries and resources for teaching or studying To Rise Again at a Decent Hour.

To Rise Again at a Decent Hour from BookRags. (c)2022 BookRags, Inc. All rights reserved.