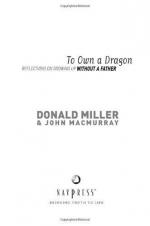 To Own a Dragon: Reflections on Growing up Without a Father Summary & Study Guide

Don Miller (author)
This Study Guide consists of approximately 27 pages of chapter summaries, quotes, character analysis, themes, and more - everything you need to sharpen your knowledge of To Own a Dragon.

To Own a Dragon: Reflections on Growing up Without a Father Summary & Study Guide Description

To Own a Dragon: Reflections on Growing up Without a Father Summary & Study Guide includes comprehensive information and analysis to help you understand the book. This study guide contains the following sections:

This detailed literature summary also contains Topics for Discussion and a Free Quiz on To Own a Dragon: Reflections on Growing up Without a Father by Don Miller (author).

In the prologue to the story, Donald Miller admits that he specifically addresses men who grew up without a regular father figure. He aims to explain what that means and the effect it has on one's life. He also explores areas that a man without a father must learn on his own, such as women and sex.

Mentoring, according to Miller, fills some of the gaps left by a missing father. Though the idea of a father appeared as foreign to Miller as a fairytale dragon, he learns some of life's lessons through various men that mentored him.

A turning point in Miller's life comes when John MacMurray, the leader of the college-age bible study at his church in Oregon, invites him to live with his family. The invitation, more of a command than a question, offered Miller a glimpse into the daily workings of a family with two supportive parents. From the MacMurray family, Miller learns that everyone in a family has a job. Because of this job, everyone holds a place of importance. In Miller's life, he often felt unimportant, if not bothersome, to those around him.

Miller also learns the importance of honesty. John MacMurray explains that one must be careful in telling even small lies, as they callus one's heart over time. One's character depends much on one's honesty. Character also depends upon one's work ethic. MacMurray teaches Miller that no shame lies in an honest day's work. He explained that work offers one a glimpse into the mind of God. Just as God worked to create man, man works to worship God.

Spirituality also plays a role lin Miller's development through this book. His sense of God develops mostly through his conversations with John MacMurray. Ultimately, he learns that God fathers all people who submit to his authority. Such an idea revolutionizes much of Miller's life. Whereas he spent much of his early life wandering aimlessly, because he had no father to validate his very existence, under the fathership of God, Miller gains self-worth.

Miller's book centers around the question, "Why does God allow bad things to happen?" In the end, he discovers that bad things happen to some people to develop their empathy toward others. When one can experience great hardship and overcome, and even forgive, that person possesses the ability to lead others in the same path of healing.

Not only does Miller learn this in the course of his book, he offers this advice to do that very thing. He directly addresses, through his book, men in the same predicament as himself. He offers his advice and encouragement to them. He admonishes them to take responsibility for their own lives, regardless of the actions of their fathers.

More summaries and resources for teaching or studying To Own a Dragon: Reflections on Growing up Without a Father.

To Own a Dragon: Reflections on Growing up Without a Father from BookRags. (c)2022 BookRags, Inc. All rights reserved.