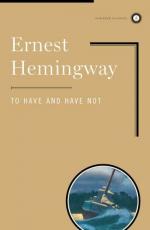 To Have and Have Not Summary & Study Guide

Ernest Hemingway
This Study Guide consists of approximately 55 pages of chapter summaries, quotes, character analysis, themes, and more - everything you need to sharpen your knowledge of To Have and Have Not.

To Have and Have Not Summary & Study Guide Description

To Have and Have Not Summary & Study Guide includes comprehensive information and analysis to help you understand the book. This study guide contains the following sections:

This detailed literature summary also contains Related Titles and a Free Quiz on To Have and Have Not by Ernest Hemingway.

Ernest Hemingway's To Have and Have Not is the story of an honest, trusting Floridian who is driven to crime during the Depression. Being cheated as a sports fishing guide, Harry Morgan smuggles alcohol and human beings, twice double-crossing the criminals who hire his services. The second time proves fatal for Morgan, who is to widow Marie a good man whose kind will not be seen again.

Pleasure boat captain Harry Morgan tells a tale of woe, being swindled by an inattentive sports fisherman after turning down good money to smuggle Cubans into the Florida Keys. Pal Frankie introduces Morgan to a Chinese businessman, Mr. Sing, who wants him to take illegal aliens to Tortugas. Morgan refuses to take his friends along and sets to sea heavily armed. Alcoholic Eddy stows away and proves useful as Morgan double-crosses Sing. With the aliens locked below decks and money in hand, Morgan kills Sing and sinks his body.

The next spring, Morgan and mate Wesley are shot by Cuban officials while loading bootleg alcohol and survive a major storm en route to Key West. Morgan sinks the contraband in shallow water for another boat to pick up. During the operation, in which Wesley cannot take part because of his pain, a high-ranking U.S. government official happens by on a fishing trip and turns Morgan in. His boat is impounded and his right arm has to be amputated.

By winter, Morgan is desperate to keep his family fed. Sleazy lawyer "Bee-lips" Simmons brokers a meeting with Cuban revolutionaries, and Morgan plans another double-cross. He easily steals his boat from the Navy Yard impound but loses it again when someone sees it hiding. He then charters Freddy's boat and goes home for what proves to be the last time. Lusty wife Marie fetches his Thompson submachine gun, loads clips, and weeps as they say goodbye. The Cubans rob a bank, race aboard, kill Tracy in cold blood, and force Morgan to race seaward. While Emelio expounds on the Cuban revolution, Morgan looks to avenge Albert. Morgan opens fire on the robbers, but merely wounds one who then shoots him in the gut.

While Morgan drifts in agony and despair, both Gordons commit adultery and end their marriage with great acrimony. He ends up in Freddy's bar buying drinks for World War I veterans, and slugs MacWalsey, who is cuckolding him.The Coast Guard tows Freddy's boat into Key West past the yacht basin where the diverse lives of the idle rich are peeked into before revealing Morgan's fate. They include a gay couple, a desperate tax evader, a picture postcard family, two Estonian writers, and a beautiful insomniac with an alcoholic husband and lover. As the basin sleeps, a crowd forms to see Morgan carried ashore and taken to the hospital, where he dies in surgery. The sheriff secures the baffling crime scene, Marie skips the funeral, and a week afterward considers what a man she has lost and prefers to be the victim rather than the survivor.

More summaries and resources for teaching or studying To Have and Have Not.

To Have and Have Not from BookRags. (c)2022 BookRags, Inc. All rights reserved.