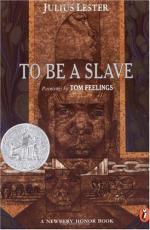 To Be a Slave Essay & Project Ideas

1. Research the Reconstruction period of American history (the twenty years following the end of the Civil War). Explain its significance, both positive and negative, to blacks in America.

2. Rhody Holsell, a slave in the book, says that if President Lincoln had lived, there would have been no violence perpetrated against blacks after the war. He thinks that Lincoln would have separated blacks from whites and given them their own nation. How do you think that this solution would have worked?

Thomas Hall, an ex-slave quoted in To Be a Slave says of Stowe, "I didn't like her book and I hate her." Why might Hall have this response to the book?

4. Research and report on how the "underground railroad" functioned.