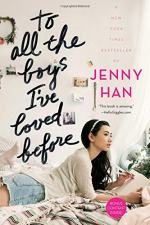 Related Topics
It's Not Summer Without You
Always and Forever, Lara Jean
P.S. I Still Love You
The Summer I Turned Pretty
We'll Always Have Summer

To All the Boys I've Loved Before Summary & Study Guide

Jenny Han
This Study Guide consists of approximately 45 pages of chapter summaries, quotes, character analysis, themes, and more - everything you need to sharpen your knowledge of To All the Boys I've Loved Before.

To All the Boys I've Loved Before Summary & Study Guide Description

To All the Boys I've Loved Before Summary & Study Guide includes comprehensive information and analysis to help you understand the book. This study guide contains the following sections:

This detailed literature summary also contains Quotes and a Free Quiz on To All the Boys I've Loved Before by Jenny Han.

The following version of this book was used to create this study guide: Han, Jenny. To All the Boys I’ve Loved Before. Scholastic. 2014.

To All the Boys I’ve Loved before tells the story of Lara Jean Covey and her family, as they adjust to life after her older sister Margot moves to Scotland to attend college. Lara Jean has to cope with the fallout from her private love letters being mailed to all of her crushes without her sister’s advice to guide her. In the prologue, Lara Jean explains that she writes love letters to boys that she has loved as a way of getting over them: once she has expressed her feelings on paper she feels she can move on and she does not intend to ever send the letters. She keeps the letters in a teal hatbox.

Margot informs Lara Jean that she has broken up with her long-term boyfriend Josh ahead of moving away to attend college in Scotland. The news makes Lara Jean think about her own relationship with Josh, whom she has had romantic feelings for since before he started dating Margot. Margot leaving will be difficult for the Covey family to cope with, because she has been the one who has kept the others organized since the death of their mom several years earlier.

One day at school, Lara Jean is approached by a boy named Peter Kavinsky who wants to discuss some inaccuracies about him in a letter that she wrote him. After initially protesting that she did not write to him, Lara Jean is horrified to discover that he is holding a love letter from her hatbox. Lara Jean races home and discovers that the hatbox is missing: she asks her father, Dr. Covey, and her younger sister, Kitty, if they know where it is, but they do not.

The next day at school, Margot’s ex-boyfriend Josh asks Lara Jean about the love letter he has received from her. Not wanting to admit that she still has feelings for him, Lara Jean tells Josh that she is dating Peter Kavinsky, whom she grabs and kisses as he walks by. Later, Lara Jean explains to Peter why she kissed him and he suggests that they should pretend to be a couple so that things can go back to normal between her and Josh and so that Peter can make his ex-girlfriend Genevieve jealous.

Peter starts giving Lara Jean a ride to school in the mornings and he also drives Kitty: Kitty and Peter get on well with each other. Peter helps Lara Jean make cupcakes for Kitty’s PTA bake sale before taking Lara Jean to a party and invites her to join him on a trip to an estate sale to scout purchases for his mom’s antique business. Both Margot and Josh are unhappy that Lara Jean is dating Peter, but Dr. Covey and Kitty really like him and are pleased that he is Lara Jean’s boyfriend.

In the run up to Christmas, Peter helps Lara Jean and Kitty with plans for their annual Christmas Cookie Bonanza: a tradition that used to involve Margot and Josh. Peter convinces Lara Jean to come on the school ski trip with him. Josh helps the Covey family decorate their Christmas tree and kisses Lara Jean, telling her that he has always had feelings for her. When Margot returns for the holidays she is upset that the others made the cookies and decorated the tree without her. Margot makes plans to hold a recital party for their neighbors in their home.

On the ski trip, Peter tells Lara Jean that he has developed feelings for her and that he wants them to be a real couple. After initially rejecting Peter’s advances, Lara Jean finds him in the hot tub, gets in alongside him, and they kiss. The next day, Peter’s ex-girlfriend Genevieve tells Lara Jean about a rumor that Peter and Lara Jean had sex in the hot tub. Mortified, Lara Jean blames Peter for the spread of the rumor and refuses to speak to him.

Peter attends the recital party at the Covey’s house because Kitty invited him. Peter confronts Josh about kissing Lara Jean and Margot overhears. Margot tells Dr. Covey the rumor about Lara Jean from the ski trip and he offers to take Lara Jean to the doctors to arrange birth control. Lara Jean confronts Margot and they eventually reconcile after Lara Jean tells Margot how much she looks up to her and Margot confesses how difficult she has found it setting a good example for Lara Jean and Kitty since the death of their mom.

Kitty confesses to Lara Jean that it was her who stole the hatbox and mailed the love letters. Kitty reveals that she has kept all of the notes that Peter sent to Lara Jean during the course of their fake relationship. Reading back through the notes, Lara Jean realizes that she still has feelings for Peter and she begins to write him another letter.

More summaries and resources for teaching or studying To All the Boys I've Loved Before.

To All the Boys I've Loved Before from BookRags. (c)2022 BookRags, Inc. All rights reserved.