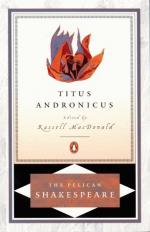 William Shakespeare
This Study Guide consists of approximately 31 pages of chapter summaries, quotes, character analysis, themes, and more - everything you need to sharpen your knowledge of Titus Andronicus.

Broude sees four kinds of revenge in the play: human sacrifice to pacify the spirits of dead warriors, family vendettas, human justice, and divine vengeance. He regards Titus as the man chosen by the gods to carry out their revenge and help restore human justice in Rome.

Brower focuses on Timon as an undeveloped tragic hero. He suggests that Timon represents a noble man subjected to unspeakable suffering, whose cries for justice remain unanswered. A principal failure of the play, Brower contends, is that it offers Timon only a grim set of possible responses: he can go mad, increase his suffering by rigidly...

More summaries and resources for teaching or studying Titus Andronicus.

Titus Andronicus from Gale. ©2005-2006 Thomson Gale, a part of the Thomson Corporation. All rights reserved.