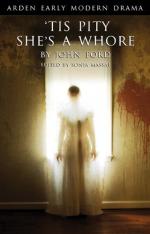 Act I, scene i

The Friar and Giovanni discuss Giovanni's incestuous love for his sister, Annabella. The friar, formerly Giovanni's teacher when he studied at the university of Bologna, warns him of the seriousness of his sin, but Giovanni claims his passion remains beyond his control. The Friar believes that Giovanni, a good student of logic, uses logic to prove something sinful to be virtuous. The friar warns him that others who used logic "to prove / There was no God ... / Discover'd ... the nearest way to hell."

When Giovanni begs for his advice, the Friar urges him to fast and pray, which Giovanni agrees to try, though it fails to rid him of his incestuous love. He believes himself fated to love his sister and to pursue her love.

Grimaldi and Soranzo are both wooing Annabella. Soranzo believes that Grimaldi is speaking badly about him...