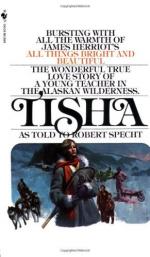 Tisha: The Story of a Young Teacher in the Alaska Wilderness - Chapter 15-16 Summary & Analysis

Bobby Specht
This Study Guide consists of approximately 25 pages of chapter summaries, quotes, character analysis, themes, and more - everything you need to sharpen your knowledge of Tisha.

Anne arrives back in Chicken on New Year's Eve and skipped the party at Maggie's roadhouse. She wrote a letter to Fred telling him how much she missed him and wondered if he didn't really care about her and that was why he left. Nancy left the party and came over to wish her Happy New Year at midnight. Anne still refuses to come to the party.

When school began, Anne felt different. She decided she was going to teach the students, and Rebekah, as much as she could before June. Anne stopped being what people wanted her to be and was now herself. Other people knew it, too.

Fred wrote and told her that his feelings for her were sincere and that he did what he thought was right. He may stay in Steel Creek during the summer...

More summaries and resources for teaching or studying Tisha: The Story of a Young Teacher in the Alaska Wilderness.

Tisha: The Story of a Young Teacher in the Alaska Wilderness from BookRags. (c)2022 BookRags, Inc. All rights reserved.