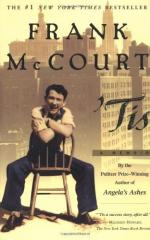 Frank McCourt
This Study Guide consists of approximately 31 pages of chapter summaries, quotes, character analysis, themes, and more - everything you need to sharpen your knowledge of 'Tis.

This detailed literature summary also contains Topics for Discussion and a Free Quiz on 'Tis: A Memoir by Frank McCourt.

This is the tale of the life of Frank McCourt, encompassing 36 years as he journeys from Ireland to New York and tries to find his place in the world. The child of an absent father and a mother forced to accept charity for the survival of her family, Frank does not really know what his role in life is. He dreams of a better life in America and, at the age of 19, sails on the Irish Oak to a land of promise and wealth. Once in New York Frank struggles to find his place, working hard at surviving and sending home every spare cent he can to support his mother and younger brothers. Despite the fact that his family and friends in Limerick think he is lucky to be in America, Frank finds it difficult to fit in, always feeling out of place and not quite good enough.

Things change a bit for Frank when he enters the Army during the Korean War. Even though he receives the same training as those around him Frank still feels depressed about his inferiorities, often referring to the 'dark clouds' that cloud his mind as he fights to find some happiness in life. Though it seems odd that someone would try and find happiness during wartime, Frank has been unable to find and hold happiness anywhere, so he continues to try and find it.

After the war Frank is able to talk his way into New York University and while working nights and weekends is able to earn his teaching degree. Getting a job at McKee Vocational and Technical School Frank stills struggles with his insecurities and making his way in the world. Despite marrying his love Alberta and becoming a father to his beloved Maggie, Frank still feels as if he is unworthy of the things he has, and continues to work for the things that he feels will make him whole.

While Frank worries about the failings in his own life, his mother arrives in New York and he is unable to deal with her bitterness at life, something he sometimes mirrors. Angela McCourt's inability to accept goodness in life bothers Frank, as he has the same issues himself. Despite this, Frank does make the effort to understand his mother and her feelings, an effort he continues to make until she passes away, still an unhappy woman who's life was spent struggling to make the lives of her children better.

Frank winds up unable to continue the charade of the happy American life, divorcing his wife after many years together. McCourt continues teaching, trying to bring the joy of learning and the excitement of life to the students in his care. Though Frank goes through life thinking that something is missing, or that he is unworthy of the good things that have come his way, he battles on, longing for the peace that he hopes to find some day.

The novel ends in 1985, 36 years after Frank arrived in New York. Frank has returned to Ireland to bury his father and his mother. Unable to mourn them in what he feels is a proper and respectful way, Frank mourns them for what the could have been, for what they longed to be in their youth, and hopes that he can someday find the happiness that has eluded his parents.

More summaries and resources for teaching or studying 'Tis: A Memoir.