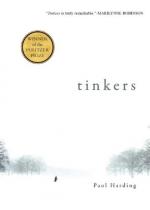 Paul Harding
This Study Guide consists of approximately 20 pages of chapter summaries, quotes, character analysis, themes, and more - everything you need to sharpen your knowledge of Tinkers.

This detailed literature summary also contains Topics for Discussion and a Free Quiz on Tinkers by Paul Harding.

Paul Harding won the Pulitzer Prize for writing Tinkers. The story follows the main character, George Washington Crosby, as he lay dying. George Washington Crosby chronicles his own life from boyhood to the time he currently lays in the hospital bed in his dining room, surrounded by his wife, daughters, sister, and grandchildren.

Additionally, George also reveals the life of his own father, Howard Crosby from the time he was a boy, until he dies in bed while living under an alias and being married to his second wife. Howard died, estranged from his first family, which included George as young boy.

After retirement, George Washington Crosby takes an interest in fixing clocks. It is a hobby that ends up turning into a way for George to make extra money. He stows this extra money away in various bank accounts and safety deposit boxes around the city where he lives. as George faces his death, he is comparing the winding down of his body, organs and bodily functions with that of clock as it winds down, runs out of energy, and eventually dies - at least until something winds the clock up again.

In George's dying state, he realizes that he has more in common with his father than he ever dreamed possible. Since his father left them when George was a young man, he never really knew the man his father was. as George faces his death, he realizes that his father had his own health issues and challenges that prohibited him from being the best man and father that Howard Crosby could be.

George comes to terms with the good and the bad experiences he had in his own life. In addition, George analyzes the good and the bad experiences that his father had to deal with during his lifetime. George even goes back to analyze his grandfather, his father's father. In George's mind, he believs that one of his grandson's is reading him from a book that is in his father's handwriting - a book that seems to be a journal. In reality, there is not notebook and it's all happening in George's mind.

More summaries and resources for teaching or studying Tinkers.