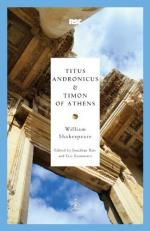 An Athenian general and statesman, he lived in the fifth century B.C. During the Peloponnesian War (431-404 B.C.) between Athens and Sparta, Alcibiades served as a commander of the Athenian army; later he switched his allegiance and led Spartan forces against Athens.

In Timon of Athens, Alcibiades is portrayed as a man of action. He is a rationalist, fully convinced of the coexistence of good and evil in the world. He is also pragmatic; his tactics are both efficient and effective. Furthermore, he is depicted as an honorable man who remains loyal to his friends. Finally, Alcibiades is a survivor, and he is responsible for restoring order to Athens at the close of the play.

Alcibiades is present at Timon's first banquet. When Timon suggests that Alcibiades would rather "be at a breakfast of enemies than a dinner of friends" (I.ii.76-77), Alcibiades says this...