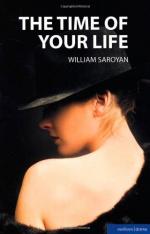 Additional Resources for The Time of Your Life by William Saroyan

William Saroyan
This Study Guide consists of approximately 97 pages of chapter summaries, quotes, character analysis, themes, and more - everything you need to sharpen your knowledge of The Time of Your Life.

This volume includes reviews of Saroyan's major plays, stories, novels, and autobiographical writings as well as numerous critical analyses of his work.

Lee and Gifford tell the story of Saroyan's life using firsthand accounts from the wife he twice divorced, his son and daughter, and friends such as Artie Shaw, Celeste Holm, and Lillian Gish.

Originally published in 1970, Studs Terkel chronicles the effects that the Great...

More summaries and resources for teaching or studying The Time of Your Life.

The Time of Your Life from Gale. ©2005-2006 Thomson Gale, a part of the Thomson Corporation. All rights reserved.