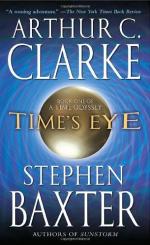 Arthur C. Clarke
This Study Guide consists of approximately 44 pages of chapter summaries, quotes, character analysis, themes, and more - everything you need to sharpen your knowledge of Time's Eye.

This detailed literature summary also contains Topics for Discussion and a Free Quiz on Time's Eye by Arthur C. Clarke.

Time's Eye by Arthur C. Clarke is a fantastic tale told in six parts about an intelligent and ancient group of beings that have been around since the universe was in its infancy. Watching their star burn itself out, they realize that they are headed towards eventual and total darkness. This causes them to rethink the significance and importance of life itself and in an effort at preservation, the "Firstborn," as they are christened by those left on Earth, take drastic action. Sampling several cross sections of time and life, the Firstborn cause space to collapse on itself and reassemble Earth with only the samples they have selected. This "Discontinuity" brings together a diverse group from varying time zones, with unpredictable consequences. The Firstborn believe that life itself is so important that it is acceptable to sacrifice some of it in order to save the remainder.

When the Discontinuity occurs, many species on earth find themselves isolated on a new and unfamiliar world. Earth's time is turned back to the thirteenth century and thrust together in this time are four cosmonauts stranded aboard a space capsule above earth; three people on an observation and rescue helicopter from 2037; a group of British soldiers along with reporters including Rudyard Kipling at a fort called Jarud from 1885; two of the first bipeds on earth who are captured by the soldiers; Genghis Khan and a large group of his followers; Alexander the Great and his entourage of worshipers and advisers; a group of Neanderthals and several smaller samplings of humanity including a colony of Fish Eaters and what remains of the city of Babylon. Technology is undeveloped and communications are unknown with the exception of the contact made between the cosmonauts who inadvertently find themselves in the company of Genghis Khan and his men, and the helicopter crew who end up with the British and in the company of Alexander the Great.

This varied group left on Earth must cope with weather anomalies, and time junctures that resemble an Earth randomly stitched together by madmen. Inspired by one of the cosmonauts, Genghis Khan marches on Babylon intent on ruling the world and conquering Alexander the Great. The other surviving cosmonaut realizes the folly of their interference, and contacts one of the helicopter pilots using a previously outdated ham radio to warn Alexander of their impending invasion. His perceived treachery is severely dealt with. Throughout the conflict that ensues, many orbs resembling eyes float effortlessly above the ground observing the interactions of the newly created world. While most of the eyes merely observe, the largest one located in the Temple of Marduk in Babylon is a gateway and one woman, Bisesa Dutt from the helicopter crew, convinces the Firstborn to allow her to go home. The surprises continue when she returns to find a large eye hovering over the London skyline in her own time. As book one of a time odyssey, it is a compelling read.

More summaries and resources for teaching or studying Time's Eye.