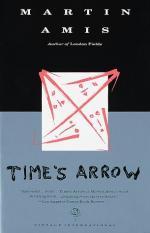 The perception of events occurring backwards by the entity in Tod/John/Odilo's head throughout the novel brings both innocence and a convoluted perception to everything.

While the narrator is able to translate simple happenings, like backwards speech, and has a rough feeling that things are in reverse, becoming excited when people walk towards him or read front-to-back, he still evaluates most events as "value reversed" based on seeing the cause and effect working backwards and misinterpreting what he sees.

The biggest example of this is his life on the German death squads. He imagines, in the most awful real situation where Odilo is directly involved in the deaths and torture of thousands of people, that it is a great, even saintly thing that Odilo, is doing. His reverse view gives him the impression that he is creating life, instead of destroying it. His view tells him...